Owatonna clamps down on defense for second straight week, moves above .500 with victory over rival Northfield

NORTHFIELD — With a chance to seal the victory, it was only fitting that the Owatonna defense finished what the offense started on Friday night.

Fully-charged by this point and glaring across the line at a Northfield team setting up shop at its own 3 yard line, Ryley Glassmaker shot through a crease on the offensive line and was the first of multiple defenders to drag Raiders’ quarterback Soren Richardson to the grass for a sack in the end zone with 6 minutes, 8 seconds on the clock in the fourth quarter.

The safety, which gave OHS an insurmountable 19-point cushion, punctuated what was a thoroughly dominant effort by the Huskies’ defense in a critical Big Southeast District victory at Memorial Field in Northfield.

It also took place less than 20 seconds after Jacob Ginskey tossed an interception deep in NHS territory on a pass that would have served the same purpose of icing the game. That is, if it had reached it intended target.  But even after tossing a few errant passes and sporadically letting his inexperience bubble to the surface, the Huskies still appear to have found their quarterback of the future in the sophomore, and perhaps just as importantly, the quarterback of the present.

The offensive line also continued to show marked improvement from the previous week and paved the way for Owatonna’s first 200-plus yard rushing output of the season.

As for the other side of the ball, well, they’ve executed at a completely different level recently and emerged as the backbone of the 2021 squad. In Week 5, they simply flexed their muscles against the Raiders, sending their rivals from the north tumbling into their third loss in four games.

“The defense continues to come along,” Owatonna coach Jeff Williams said. “They really settled down and played with confidence. Our offense put our defense in some precarious situations, but by and large, they did awesome.”

A week after holding Austin to zero first downs after halftime, Owatonna similarly kept Northfield off the scoreboard for the game’s final 38 minutes and allowed the Raiders to move the chains just once the entire second half.

The Huskies also picked off three passes — getting interceptions from 75% of its starting defensive backfield — and transformed four total Northfield turnovers directly into 14 points.

Richardson finished just 8-for-29 (27.5%) passing and was picked off once apiece by Collin Vick, Caleb Vereide and Owen Beyer. In a particularly smothering stretch that spanned parts of two quarters, the Northfield junior completed just 1 of 15 throws and amassed just 14 yards through the air after halftime. 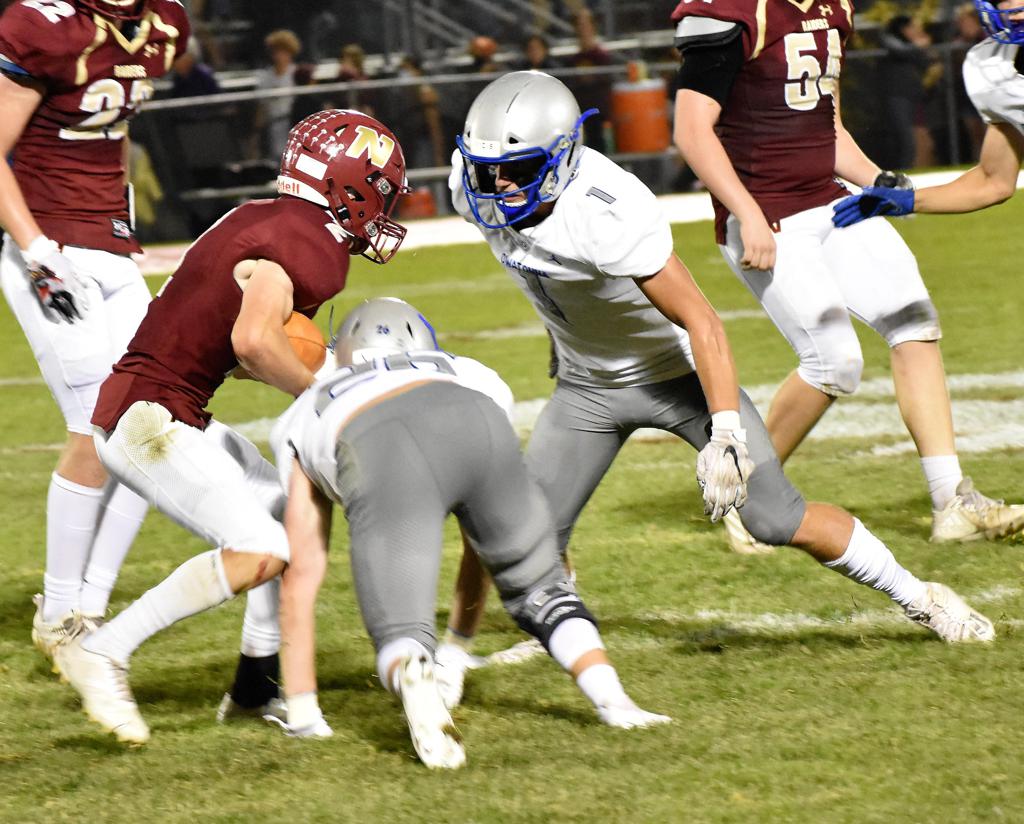 “We got some nice secondary play tonight, which was a little shaky at times last week,” Williams said. “But this week, overall, it was pretty solid. There were a few pass-interference calls in the first half, but they made some nice breaks on the ball and made some plays.”

Despite the Raiders falling behind 14-0 before the mid-point of the opening stanza, Williams went on to say that he believes their game plan was most likely to try and attack the Huskies through the air from the onset.

After hitting Tate Journell streaking wide open beyond the secondary for a 27-yard touchdown to pump life into the stadium and draw his team within 14-7 late in the second quarter, Richardson completed just three passes for the remainder of the game and was bothered by a constant wave of pressure from Owatonna’s blitzing linebackers and penetrating defensive linemen.

“Watching their video, we have four games on them, they are a Wing-T team, but they have a quarterback who they really like and they throw the ball a lot,” Williams said. “He is a gunslinger, and they are looking for some big plays. I don’t think they did anything against us that wasn’t in their game plan. I think they came out expecting to throw the ball with some success against us.”

Ironically, what transformed into a defensive rout by the Huskies started as a barn-burner as the teams combined for three touchdowns in the game’s first 10 minutes. Cael Dowling pounced on a Northfield fumble deep in Raiders’ territory on the second snap of the game and OHS went ahead 7-0 shortly after when Ginskey moved the pile forward from five yards out at the 11:04-mark.

On Owatonna’s next possession, Dylan Maas accelerated through a hole in the middle of the line and raced 50 yards to paydirt to help make it 14-0 with 7 minutes, 4 seconds remaining in the opening stanza. The long run marked the second straight game for Maas with a touchdown of 50 or more yards and his team-leading 152 rushing yards established a new career-high that had been set just six days prior when he rang up 132 yards against the Packers. 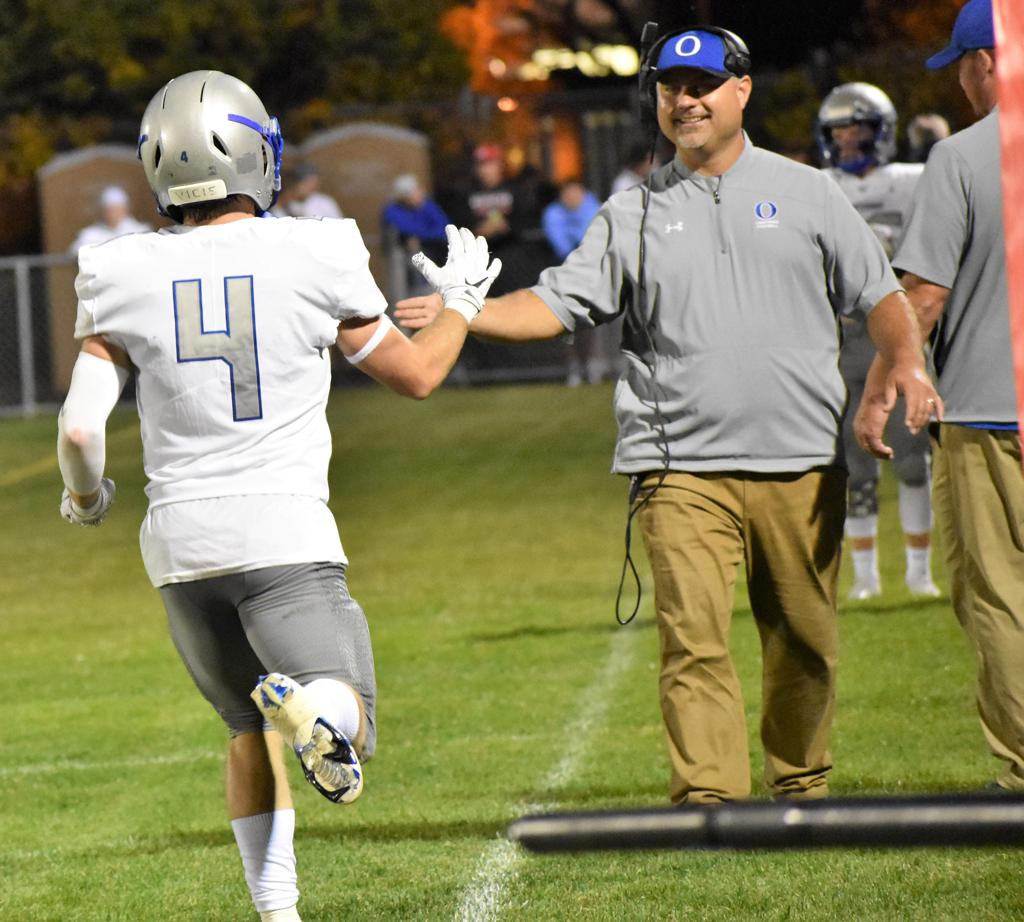 “I thought Dylan ran well,” Williams said of his senior tailback that has now accumulated 338 yards from scrimmage in the last two games. “He popped that one early on a great block by Grant (Achterkirch) on that iso-block. Dylan read that and just pulled right in behind Grant and took off.”

Northfield accounted for the vast majority of its offensive production on its first quarter — 84 of its 128 total yards to be exact — and capped a game-long 10-play, 80-yard drive with its only touchdown of the game with 2:28 left in the first quarter.

From that point forward, Northfield gained just three more first downs for the duration of the game and netted less than 50 total yards, but remained within striking distance thanks to a long return on a blocked field goal attempt early in the second quarter and two Ginskey interceptions. The Raiders, though, failed to cash-in after the seemingly game-changing special teams play and went scoreless following the two OHS turnovers.

“They found a way to get off the field,” Williams said of his defense. “Whether it was turning them over on downs, or creating turnovers, they stepped up tonight. That was big.”

Ginskey followed his sparkling career debut against Austin by completing 50% of his passes (9-for-18) and accounting for two touchdowns, the second of which came when he wiggled out of a sack, rolled to his left and sizzled a pass across his body to Luke Wottreng in the back of the end zone from 8 yards out with 11:52 left in the fourth to give OHS a 24-7 lead after the kick.

“He is going to be a very fine quarterback for us, I believe that,” Williams said of Ginskey. “I was hard on him in a couple situations, and a lot of that is he just doesn’t know what’s in my head yet. When we call something, there’s a reason. And I get in the comfort zone of having a third-year guy like Brayden Truelson who knows exactly why I call something and goes to the proper receiver, and it works. It will take time for Jacob to figure out what I’m thinking, but he will get there.”

Nick Williams — who had a 20-plus yard touchdown called back due to a penalty in the fourth quarter — led Owatonna with four receptions for 39 yards. Maas caught a couple passes for 34 yards and Achterkirch took his only reception 25 yards down the sideline, hauling in the throw despite his right hand being tightly wound into a giant club protecting his injured hand.

Drew Henson was perfect on extra points and drilled a 34-yard field goal on the final play of the second quarter to give Owatonna multi-score lead going into the break.

THE SLANT I A view from the sideline

Here’s the deal: Finally healthy and finding its rhythm, the Huskies defense is becoming the identity of this team and put forth another lights-out effort against the Raiders in the game’s final three quarters.

Where Owatonna goes from here: The Huskies host struggling Rochester John Marshall for Homecoming next week before capping the regular season against a pair of tough non-sectional opponents in New Prague (Week 7) and Kasson-Mantorville (Week 8). If Owatonna can beat the Rockets and simply go 1-1 against the Trojans and KoMets, it would essentially clinch the No. 2 seed in the Section 1-5A tournament.

The Huskies stopped the Raiders on fourth down on back-to-back possessions in the second quarter, one of which ended at the Northfield 8-yard line and the other at the Northfield 24…The officials threw three unsportsmanlike conduct penalties in the game that penalized 15 yards apiece, but the longest infraction of the game came on a holding penalty against the Huskies that set them back almost 20 yards. That is because unlike college and the NFL, the high school penalizes 10 yards from the spot of the infraction and not the line of scrimmage…In total, the teams combined for 11 flags…Owatonna senior QB Taylor Bogen will officially miss the remainder of the season with a knee injury and will be out for the next 8-9 months…Wottreng’s TD was the first offensive touchdown of his career.

The Rockets: The Huskies will host a struggling JM team that entered its Week 5 game against New Prague on Saturday having dropped their previous two games by a combined score of 84-13, which included a 31-7 loss to Northfield.