*NOTE: Owatonna quarterback Jacob Ginskey suffered a hard hit late in the second quarter and left the game on a stretcher. He was immediately taken to Mayo Clinic and was still being evaluated as of late Saturday night.

ROCHESTER — When Tore Papenfuss picked off two passes in a three-minute span early in the second quarter to directly set up a pair of Rochester Mayo touchdowns that extended the Spartans’ lead to 15 points, Owatonna’s margin for error went up in smoke.

From that point forward, it was realistically going to require something close to a perfect effort on both sides of the ball for the Huskies to remain within sprinting distance of the fleet-footed Spartans, and even then, nothing was guaranteed. The two-and-a-half quarters that remained in the game when Mayo took its first double-digit lead at 22-7 might have offered a decent chunk of time for OHS to rally back, but also provided an ample runway for the Spartans to potentially shift into an even higher gear.

Because there’s always a higher gear with Rochester Mayo.

Predictably, the Spartans didn’t stop lighting up the home scoreboard after building their initial lead and were blazing at full throttle before the game even reached its midpoint. Mayo had only produced a little more than 50% of its per-game scoring average when Carter Holcomb plucked a 7-yard touchdown pass out of the sky with 8:53 left on the clock in the second quarter. By the time the teams headed into the locker rooms, the Spartans’ lead had swelled to 29-7.

Mayo stuck with the same blueprint its has refined during its recent football renaissance, chiefly feasting off miscues by the opposition — Owatonna threw three interceptions and lost one fumble — and transforming them directly, and swiftly, into points. In fact, the three Mayo scoring possessions directly following OHS turnovers combined for 22 points, seven plays and accounted for a collective time-of-possession of 3:05.

“They are a very talented team,” Owatonna coach Jeff Williams said after the game “Momentum or otherwise — you can’t give them extra opportunities like that and survive. You just can’t.”

The Spartans (10-0) — who will play top-ranked Mankato West in the Class 5A quarterfinals — also maintained their balanced and ultra-efficient offensive attack, splitting the difference of their 343 yards of total offense almost right down the middle between the pass and the rush. The third main pillar that has helped sustain the team’s success over the last two years has been its unforgiving run defense. Though the Huskies (5-5) periodically found traction throughout night, they were held to just 87 yards on 39 carries. Mayo finished with seven tackles-for-loss and held the Owatonna to just a 2.2 per-carry average.

“They very physical up front and very athletic,” Williams said. “They do have a tendency to tackle the running back on the way to the quarterback, so they are tough when we are trying to throw the ball too. They are just a tough, physical front four. It made things difficult.”

Mayo ultimately scored the game’s final 29 points and out-gained Owatonna by 176 yards of total offense, but Owatonna came out swinging and played the Spartans to a 7-7 deadlock after one quarter. 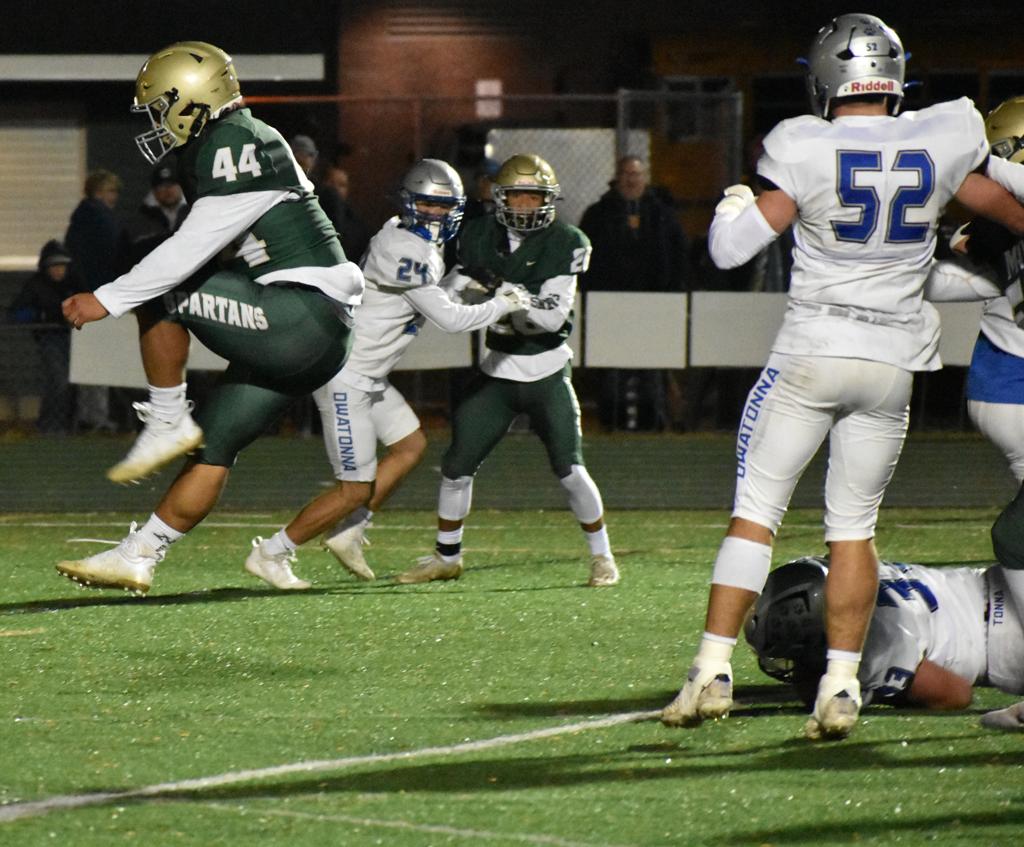 Rochester Mayo drew first blood with a surgical six-play, 80-yard drive that started, and ended, with the ball in Rudy Lozoya’s hands. His first carry covered 24 yards and sparked the touchdown trek while his second spanned three yards and crossed the goal line. Four of the Spartans six plays on the possession went for first downs.

The Huskies responded with unquestionably their finest stretch of play the entire evening and stitched together a 59-yard, 9-play scoring march to draw even with 2:20 remaining in the opening quarter. Jacob Ginskey quickly found a rhythm through the air and finished a perfect 4-for-4 on the drive while spreading the ball to four different pass-catchers, connecting with Jack Strom for a 5-yard scoring strike to account for Owatonna’s lone touchdown. It was Strom’s first career TD reception and came when Ginskey rolled to his right and threaded the needle through the Spartans’ defense and hit Strom in the middle of his chest.

Ginskey’s next two throws were intercepted by Tore Papenfuss, and the Spartans were off and running.

That is, until the action came to a screeching halt.

Two plays into Owatonna’s final possession before halftime, Ginskey rolled to his left, turning up field with the ball safely tucked into his right arm. It didn’t take long for a pair of Spartans’ defenders spot the OHS junior and began pursuing from opposing angles. Only a few strides into his run and sensing the pressure building around him, Ginskey slid feet-first to give himself up after a short gain around the Mayo 41 yard line. Just when it appeared the play had lost all momentum, a Mayo defender came flying in from straight on and caused a wicked collision. With no way to safely brace for contact, Ginskey’s head snapped backwards and slammed into the hard turf.

An unsportsmanlike conduct penalty was enforced and the player that delivered the hit was immediately ejected. Inside the stadium, the an increasingly-somber atmosphere replaced the normal buzz of a postseason game as both teams went down on one knee as Ginskey was being attended to. After about a half hour, he was eventually strapped to a gurney and wheeled off the field on a stretcher.

Williams admitted the entire situation was a “gut punch,” but also accentuated the on-field resolve of his team that stayed remarkably focused throughout the entire situation. The Huskies dominated the third quarter — possessing the ball for more than nine minutes — and nearly doubled the Spartans in total plays and yards. Owatonna marched deep into Mayo territory twice in the quarter, but came up empty both times.

“We did some nice things (after the injury). The defense played well in the second half,” Williams said. “We were able to get some things going offensively, but that was a bit of a gut-punch for us. (Noah) Truelson has been in that situation for us in the past. That’s his third time having to come into a game like that and I think he’s done a nice job coming in there and running the show. I was proud of the way he handled the situation.”

The only time the OHS defense cracked in the second half was after another turnover when Truelson was intercepted in the red zone early in the fourth quarter, leading directly to another long Beale TD run moments later.

Running directly into one of the top run defenses in the state, Conner Grems finished with 60 tough rushing yards, leaving him with 906 yards and 14 touchdowns on the season. He was one of several seniors that helped carry the team through the ups and downs of the 2022 campaign. 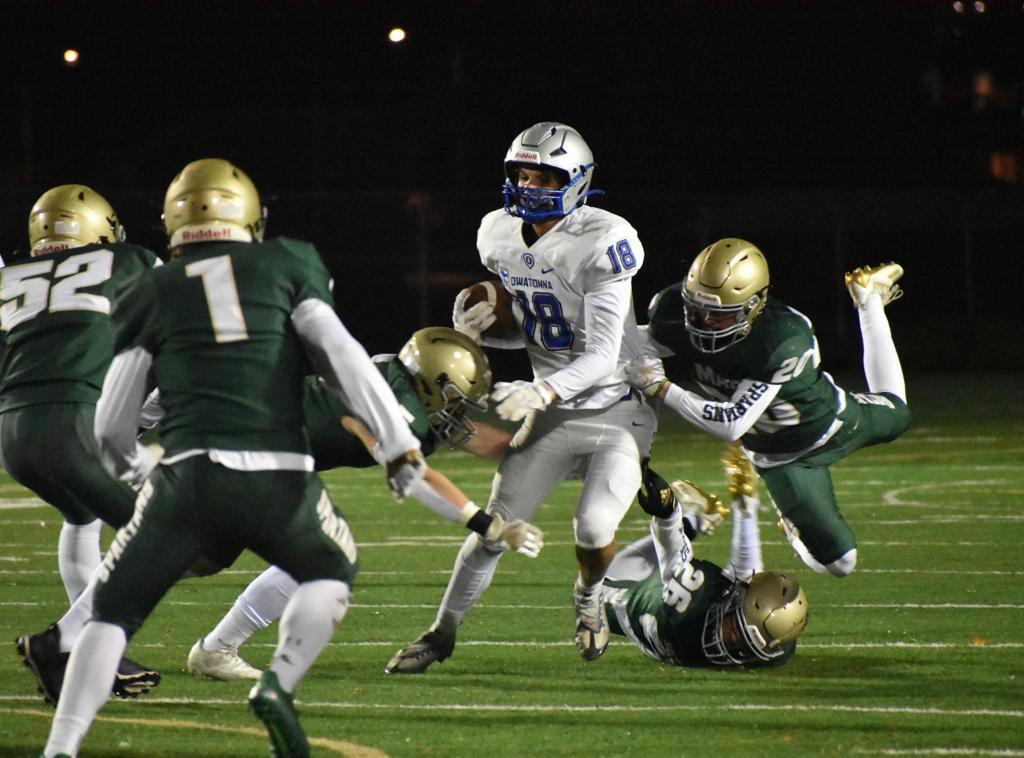 “I think our senior leadership was outstanding,” Williams said. “The kids did a good job at practice every day. The attitude was upbeat and positive all year and we didn’t have too many bad practices, and that says a lot about the tone set by the seniors.”

Saturday’s loss was hard to swallow, no doubt, and was emblematic of an Owatonna season that experienced several peaks and valleys. During the three-month odyssey, the Huskies survived a 1-2 start, swung through the highs of a three-game winning streak that moved them to 4-2, fell backward into the pit of a two-game losing streak before climbing out of the hole just in time to pull off a thrilling- victory over Northfield in the section semifinals.

“All the ups and the downs this season, that’s something we talked about with them about,” Williams said. “For us to get here, they still earned their way to a section championship football and a chance to play for a state tournament berth. I could not be prouder.”