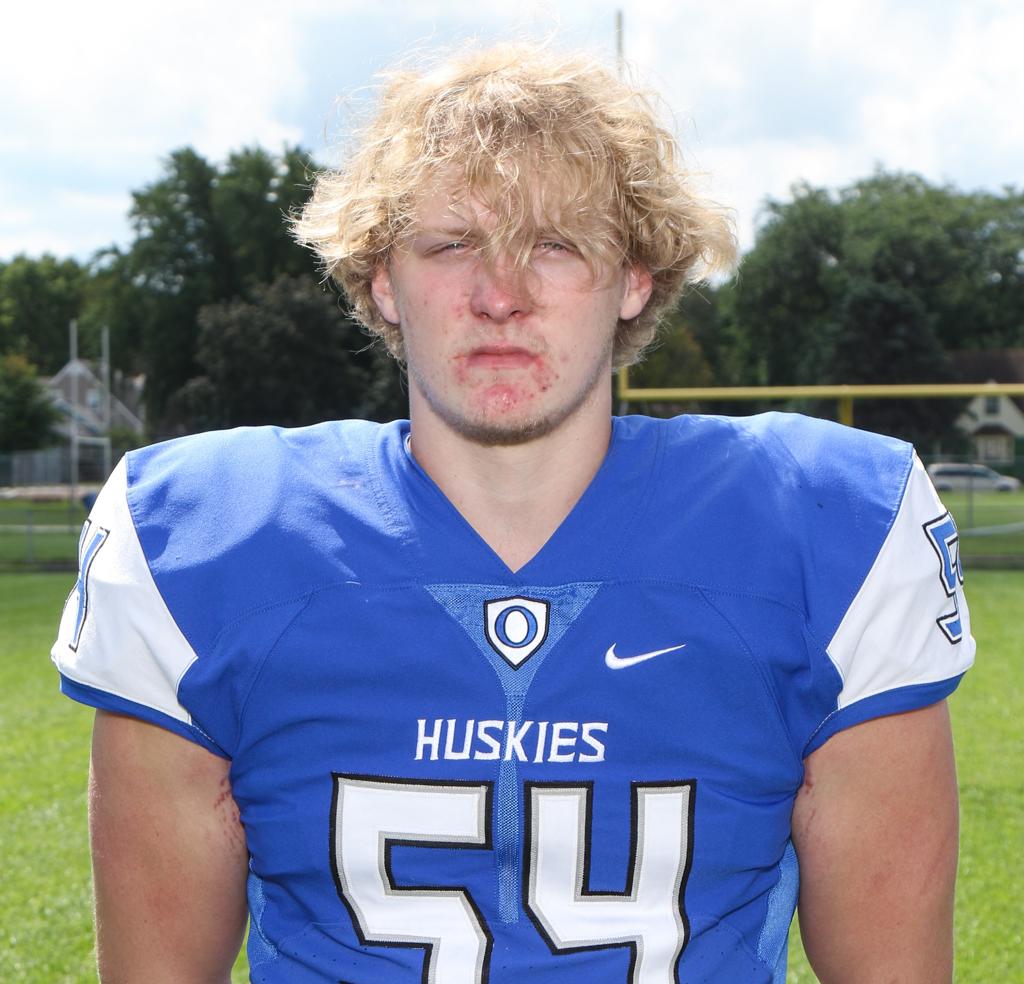 Career notes: Entered regular lineman rotation on both sides of the ball as a junior…Emerged as a two-way starter on offense (LG) and defense (DE) as a senior.

“We kind of joked that I was going to be the next Spurgy (Eli Spurgeon) and he wore 64. That wasn’t available, so 54 was close enough. I just went with it.”

“Probably the white on white. There’s a lot you can wear under it and I just like the look.”

“No. No one in my family played football.”

“I am also in wrestling. I took a couple years off because of COVID and I didn’t wrestle last year but will be this winter.”

INTERVIEW: Getting to Know ETHAN ANDERSON

Q: You were one of the guys that really added bulk coming into this year and clearly got to work in the weight room. What did your offseason routine look like, and how were you able to add so much weight?

“Well, last year I started as a 170-pound left guard, and that wasn’t ideal, even when I got up closer to 190. I knew I needed to get bigger. Pretty much as soon as the offseason began, I started eating as much as I could and lifting five, six days a week. I would focus on certain areas and basically followed a power-lifting program and the weight just started adding up.”

Q: How much weight did you add? What did your typical daily meals look like when you were in the bulking stage?

“I added about 40 pounds. I didn’t wrestle, so I could pretty much eat as much as I needed to. For breakfast, I would start with three bowls of cereal and maybe have a little something else. For lunch, it would probably be a Nutella sandwich and when my dad was home, I would eat whatever would cook. For dinner we always have home-cooked meals and it could be anything from pasta, Hamburger Helper — all kinds of stuff. I would eat whatever we had. If I still felt hungry in the evening, I would have a little something else before I went to bed. Honestly, I felt worse right away before I got used to everything. I got a lot stronger, but I changed body types. I went from a lean body type to one that was just a lot bigger. I’m eating a lot healthier now and having that the nutrition I’ve lost about 10 pounds. That’s normal for the season. If I got on the scale right now, I’d probably be at about 210. The heaviest I remember was 222.”

Q: That sort of brings me to me next point. I’m sure the fact that you have to play full-time on both sides of the ball has might contributed to your weight loss because you guys don’t get a break. It’s amazing how hard you guys are working up front.

“We knew from the start that it was going to be like that and we trained knowing we probably wouldn’t have many breaks this season. You just have to push yourself. I’m the type of player that’s always trying to bring the energy, so I’m always ready to be out there, no matter how tired I might be. As a group, I think we are way better now than we were in the beginning of the season and are playing with more discipline. Right away, people were getting tired and couldn’t handle it, which wasn’t a bad thing.  It weeded out the weak. The people who have pushed through, have done a great job. And I have to say something about the coaches. They put in so much work. It’s amazing.”

Q: On defense, your role up front within the overall scheme isn’t necessarily to ring up a bunch of sacks and is more about soaking up blockers to free up the linebackers. Talk about what it’s like playing in coach Achterkirch’s unique system.

“For me and Mikah Elstad, we basically have the same job, and that’s squeeze the down block. It’s easy to tell when we are doing our job and when we aren’t doing our job, because everything starts up front. If we stay disciplined, it helps the other guys get the numbers and we know how important our job is to the entire defense.”

Q: Now, to the other side of the ball. You’ve added some bulk, and I think that was especially huge for the guys on the interior. But being a guard means you have to be nimbler and more athletic than any other spot on the line. Within this specific group, what is your role?

“I feel like I am the guy who has the energy and will try to get everyone pumped up. I love pulling and love hitting people, so that gives me the chance to do that on offense, and that’s always nice.”

Q: We have to talk about Trever Schirmer and what he meant to this group. His absence really changed the dynamic of the lines and the shuffling continued in the early part of the season. How long did it take for you guys to adjust without Schirmer and how do you think a guy like (sophomore) Jack Meneguzzo has adjusted as the new guy?

“(Dawson) Risser was my guy, but Menaguzzo, he’s climbing and I think he’s handled the pressure well and is getting better each week. For him, I think it’s going to be about dedicating to the weight room and getting stronger over the next couple years. When I first found out that we lost Schirm with the injury, I was like ‘how did that happen?’ And then when the season started, I had to take his spot on defense. Torrin Smith was also a guy who got a lot stronger in the offseason and we all assumed he would take Trever’s spot on offense (at left tackle) and he’s done a good job.”