OWATONNA — Call it Karma. Call it luck. Call it crazy. Call it whatever you want.

Just make sure you call it a comeback.

Narrowly escaping the clutches of certain defeat and emerging from the malaise of a game that initially appeared careening toward a forgettable season-ending rout, the second-seeded Owatonna football team completed an improbable comeback and inked a memorable final chapter befitting of the occasion in the final football game at the 98-year-old OHS stadium on Saturday night.

Though several players stepped up in crucial moments against third-seeded Northfield during the increasingly-tense atmosphere in the Section 1-5A semifinal, it was Owatonna’s trusted workhorse running back, Conner Grems, who did much of the heavy-lifting throughout the duration of the contest.

Because if it wasn’t for his difficult 49-yard catch-and-run in the second quarter, or his 150 yards of total offense, or his fourth down TD plunge in the first half, none of the late-game heroics would have materialized. The senior simply wasn’t going to let his career end with a whimper. He wasn’t going to allow his teammates to go down without a fight.

He simply wasn’t going to be denied.

“I kind of saw my whole high school career flash before my eyes,” Grems said on the field moments after the game. “I just realized that I have to do something to get this win and keep this going, because I can’t stop. I love these boys too much. We want to keep playing, and it just felt like it wasn’t our time yet.”

The game’s epic final act began with a Northfield safety in middle of the fourth quarter and was highlighted, in part, by a redemptive catch by Caleb Hullopeter on Owatonna’s game-winning drive. With The Raiders (6-4 overall) leading 14-7 with 5 minutes, 17 seconds hanging on the clock, the Huskies (5-4) were given new life after a fourth down snap sailed over the head of the Northfield punter and rolled out of the back of the end zone for two points.

The Huskies started the ensuing drive in NHS territory after Noah Wellnitz scooted through a crease in the Raiders’ coverage and returned the ball 16 yards to the 40 yard line. Owatonna moved the sticks inside the 30 on just three plays, but soon found itself staring at a do-or-die situation needing seven yards on fourth down to keep their hopes alive of completing the comeback and surviving to fight for another week.

Shielded brilliantly by his rejuvenated offensive line, Ginskey took the shotgun snap, scanned the defense, stepped up in the pocket and rifled a pass across the middle, hitting Hullopeter perfectly in-stride for a 14-yard completion and giving OHS a fresh set of downs with 3:02 left on the clock.

After watching the potential game-winning grab slip through his fingers late in the fourth quarter of the Huskies’ Week 8 loss to Kasson-Mantorville, Hullopeter flashed his true colors Saturday night and helped set up Ginskey’s game-winning 1-yard touchdown run at the 1:33-mark by making unquestionably the most important catch of his career.

“I told him it was redemption time this week, and that’s exactly what it was,” said Grems, whose gutsy 7-yard run to the 1 yard line came one snap prior to Ginskey’s game-winning touchdown. “I am super proud of him.”

Added Williams: “That play was a something that we had screwed up on in the first quarter and we’re yelling at people at that point…I was frustrated. But for it to come together and really be the drive-extending play that kept everything alive was pretty cool. Special moment.”

Drew Henson then took his turn stepping up by blasting the ensuing kickoff out of the back of the end zone to immediately thwart any chance of a miracle kickoff return by the Raiders and allow his defense to take the field with a chance to officially land the knockout blow.

And that’s exactly what they did. 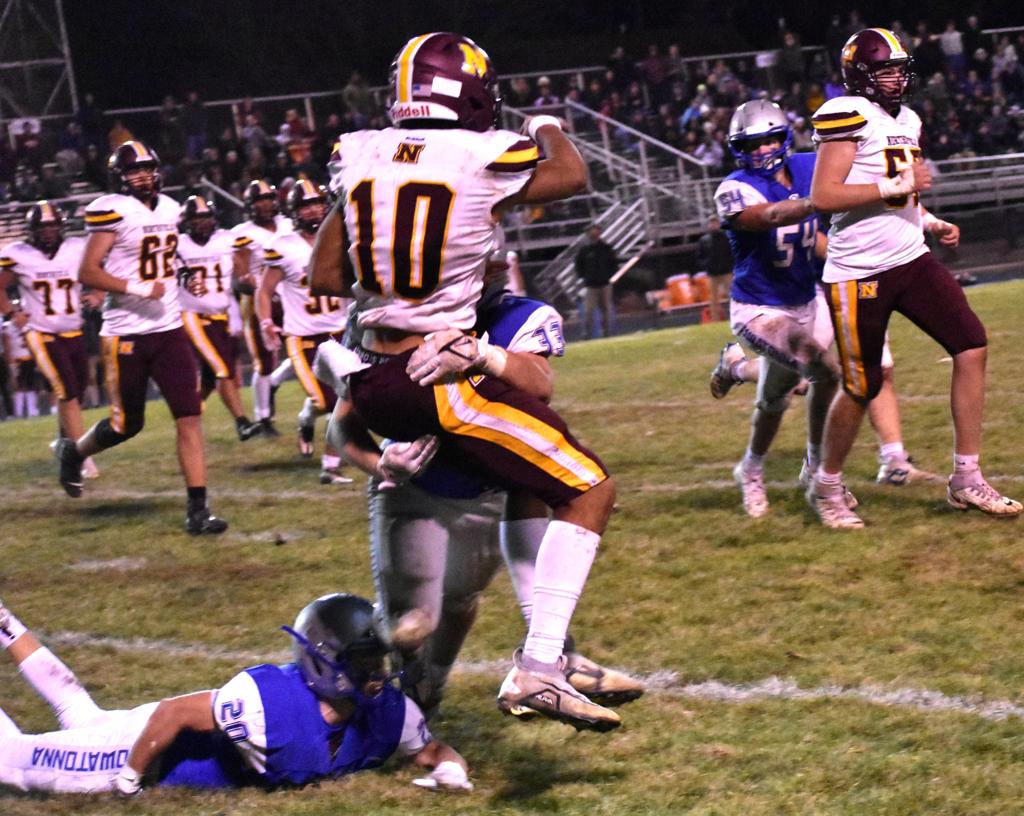 Northfield mustered just four yards and three incompletions on its final drive against a defensive unit that did not allow a single point in the game’s final 37 minutes, 11 seconds. After allowing nearly 200 yards of total offense in the first half — most of which came in the opening quarter — the Huskies yielded just 16 yards of offense in the second half and held Northfield quarterback Kamden Kasier to just 2-for-8 through the air for a paltry four yards in a long stretch that spanned three-plus quarters.

“The defense buckled down,” Williams said. “They contained Kaiser when they needed to.”

Perhaps finally being reimbursed for the backlog of misfortune that had beset the program since the middle of June when they found out reigning all-district two-way lineman, Trever Schirmer, was going to miss the entire season with a torn ACL, Owatonna finally found itself the benefactor of a little unexpected fortune between the lines.

The biggest such moment occurred when Kaiser escaped down the left sideline and sprinted past a wave of OHS defenders in the middle of the third quarter. With nothing but open grass between him and the end zone, the junior clearly allowed his emotions to get the best of him, and instead of simply gliding across the goal line and finishing off a 63-yard touchdown, Kaiser elected to cast his gaze toward the OHS student’s section and point toward the crowd in mid-stride as he crossed the 16 yard line.

The premature celebration occurred in the open field and in plain sight of the onlooking officials. Before Kaiser even had a chance to dash across the goal line, a flag was tossed into the air for what would ultimately prove to be a game-altering unsportsmanlike conduct penalty. Since the infraction occurred on the field of play and prior to Kaiser reaching the end zone, the touchdown was negated and Northfield was forced to set up just outside the OHS 30 yard line instead of sending its extra point unit onto the field looking to extend a 20-7 lead with 7:50 left in the third quarter. The stunning turn of events also played a huge part in completely taking the wind out of Northfield’s sails as Owatonna went on to stuff the Raiders on 4th-and-3 on the drive.

The fact that it was only a one-score game when Kaiser was whistled for the fateful penalty would have come as a shock to anyone who stopped watching after the Raiders came out and punched the Huskies in the teeth in the first quarter.

Northfield’s early assault commenced on the game-opening drive that ended with a 10-play, 85-yard scoring march to give the Raiders a 7-0 lead. Northfield gained 21 yards on three straight run plays to start the possession and soon blasted deep into the red zone after back-to-back runs that combined for 34 yards. Kaiser eventually scored on a 1-yard run to get Northfield on the board and soon helped extend the lead when he found Charles Monaghan wide open in the right flat before watching his teammate chug down the sideline untouched for a 68-yard catch-and-run with 1:49 left in the opening quarter.

With the home crowd looking on in stunned silence and Northfield having already accumulated nearly 150 yards of total offense, it was at this point late in the first quarter with his team trailing by two touchdowns when Williams caught himself, albeit temporarily, pondering the increasingly-probable reality that his team might just be cooked.

“Honestly, halfway through the second quarter, I was getting a little nervous,” Williams admitted. “We weren’t sustaining drives and we weren’t stopping them. Then, all of the sudden, we sort starting doing both things. We found a way to get their offense off the field and started putting drives together.”

Owatonna’s first scoring march — which came directly after its defense stuffed the Raiders on 4th-and-4 from its 29 yard line — quickly gained thrust after Grems made a difficult grab near the sideline and sprinted forward for a 49-yard gain.

“I just caught the ball over my head and honestly didn’t really think I was going to hold on,” Grems said. “I just threw my hands up, snatched it.”

Northfield didn’t make it easy on the Huskies once they reached the red zone and appeared to take another step closer to putting the game away when Rielly Kleeberger was tackled on a short run just inside the 4 yard line to force fourth down.

Re-entering the game after previously limping off the field following an awkward fall on a short run just two plays prior, Grems finally got the Huskies on the board and sliced the lead in half with a 3-yard touchdown plunge. He now has 14 TD runs on the season and has found paydirt nine times since Week 6 of the regular season. 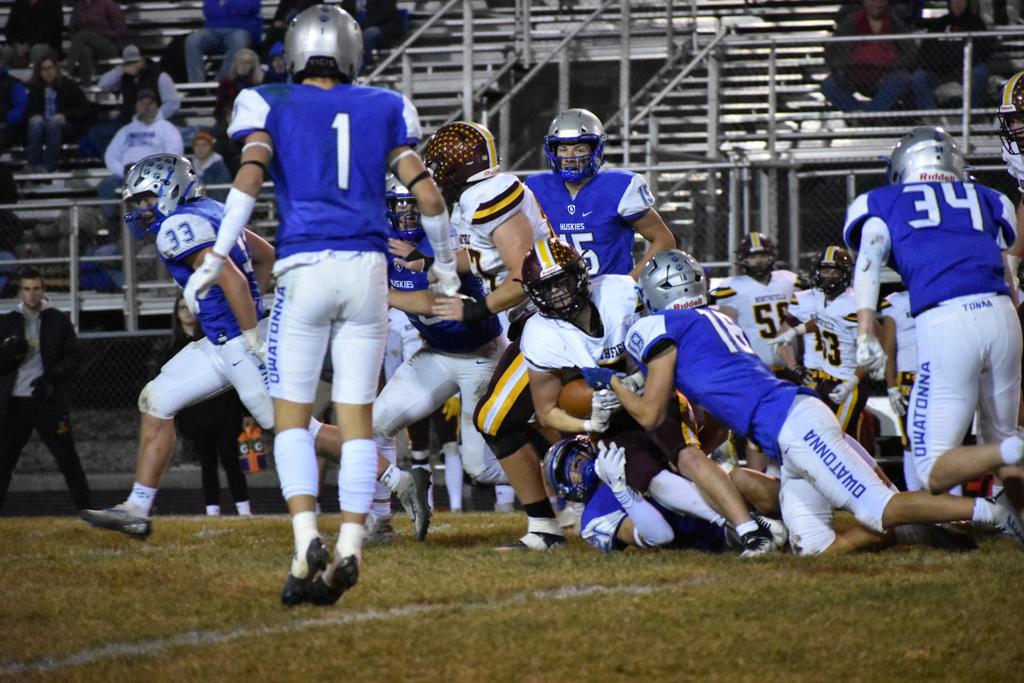 With its offense finally beginning to show some life, Owatonna’s defense regrouped in the second quarter and went on to stuff the Raiders three times on fourth down over the next two-plus, the final stand coming with 4:16 to go in the third and at the Northfield 9 yard line. Owatonna proceeded to string together a promising 17-play drive and march all the way to the Northfield 18, but saw its hopes seemingly dashed for the final time after losing a fumble with just 6:50 on the clock.

Undeterred, the defense trotted back onto the field and quickly forced a three-and-out to set the stage for the improbable conclusion to a game that won’t soon be forgotten.

“But by and large, we kept those guys pretty well bottled up after the middle of the second quarter,” Williams said. “The kids showed a great deal of poise.”

Another huge factor that in helping Owatonna pull off the victory was the steadfast execution of the Huskies’ ironmen core of two-way linemen, particularly the offensive front. The group did not allow a sack for the first game all season, consistently pried open running lanes for Grems and provided a comfortable pocket for Ginskey to operate.

Ginskey made his return to the field after sitting out the previous game and a half with an injury and finished 8 of 18 for 94 yards. The junior completed four consecutive passes during the tense final quarter and, of course, scored the game-winning TD on the ground.

GAME NOTES: A Northfield receiver dropped a long touchdown pass in the final two minutes of the second quarter that would have given the Raiders a 21-7 lead…The Raiders did not lose of fumble or throw an interception while Owatonna finished with two turnovers…Ayden Walter’s acrobatic, over-the-shoulder catch was nullified by a holding penalty in the middle of Owatonna’s first drive of the third quarter. Since the infraction took place 12 yards behind the line of scrimmage, the Huskies were penalized 22 yards, setting up for a 1st and 32 at their 25 instead of 1st and 10 at the Northfield 31. That’s a difference of 41 yards.

UP NEXT: Owatonna will travel to play top-seeded Rochester Mayo (9-1) and battle the Spartans for the Section 1-5A championship for the third straight season next Saturday. Game is slated to kickoff at 7 p.m. from Spartan Stadium.