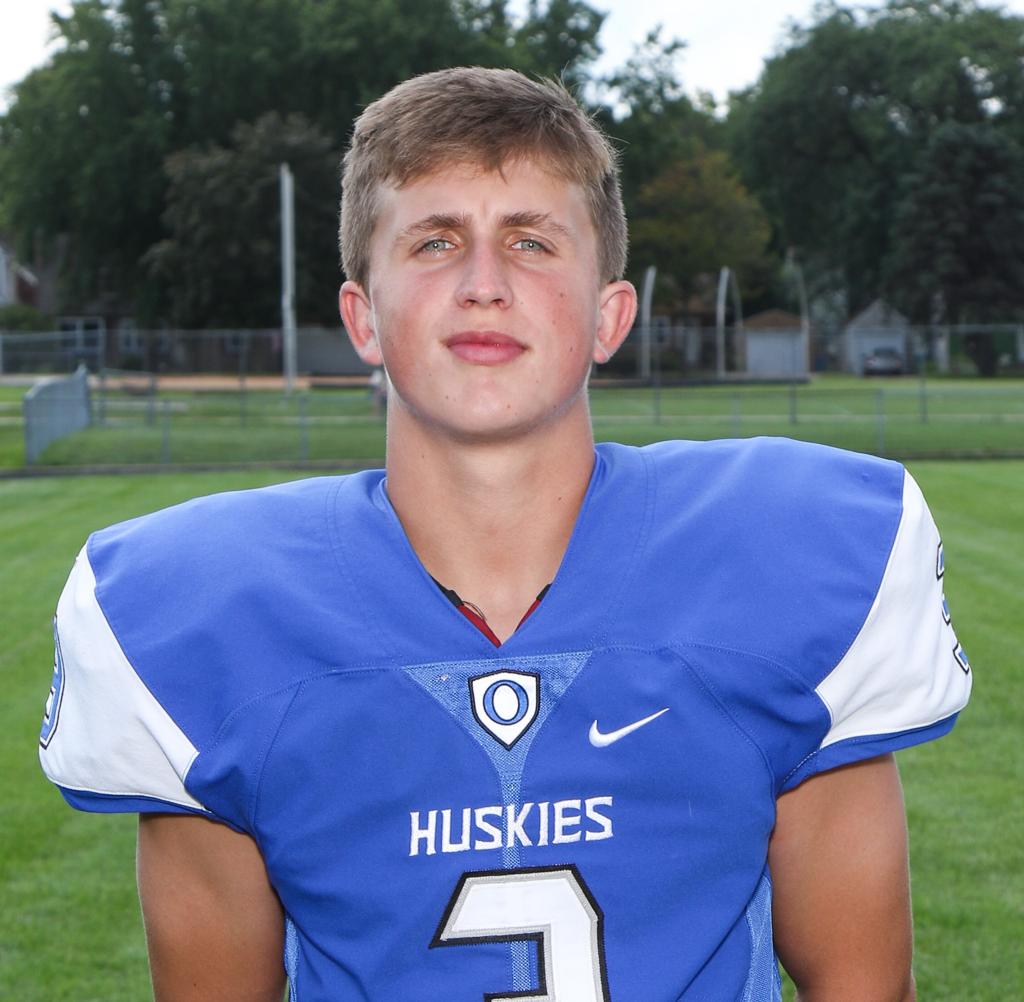 Experience/accomplishments: 2-year starter; 2nd-leading on the team in receiving yards (228), receptions (18) and touchdowns (4) as a junior in 2021

“It went seniority first, so it went seniors and then juniors (last year). Going into it, I wanted to go with four because my brother Ethan wore it and I always thought it was a good number. I wore it for baseball and I was hoping to have it for football as well. But Dylan Maas was a senior last year and he obviously had seniority and got the number. Then it was between three or six. Three was a large and six was an XL. And honestly, I thought the large fit a little better, so I went with three and I stuck with it. I had the chance to switch to four coming into this year, but I stuck with three.”

“I’d have to say the top three would have to be blue on white, it’s more of a tradition for home games. And then blue on blue for homecoming and, obviously, the Jordans. I like those Jordans.”

“Yeah, so I suppose it starts with Kevin Walter, my uncle. He was there for coach Williams’ first team at state (in 1998) when they lost in the state championship. He was a senior that year. And then my dad, Phil, he was a couple years younger than Kevin, but I think he was…1999, maybe 2000ish graduate. Then there was Ethan, he graduated a couple years ago and played three years on varsity and won a state title. My grandpa, Gary, he’s done video ever since Kevin played and is still doing it now with my dad. It is pretty cool when you actually take time to look at the whole thing. There is a lot of connections through the football team.”

“I am in three sports, baseball, basketball and football. I have been in them ever since you could start playing in fourth grade…Growing up, I never really had a favorite. It all just depended on what season it was.”

“The one that comes to mind, in the weight room, after every station is completed, coach Eggermont will yell ‘Who rah!’ Then everyone else will yell it back. I always thought that was cool. And then we always do that during pregame after his little speech. It gets us fired up every time.”

INTERVIEW: Getting to Know AYDEN WALTER

Q: Rewinding a little, coming into last year, did you expect to play such a big role as a junior? You scored two touchdowns in your first game, so I am sure that helped set the tone. But talk about your development last season and what you learned as a player?

“I knew during the summer I was obviously going to have to work to earn a starting job, and at one point, coach Williams told me I had an opportunity to jump into the starting lineup right away, but I’d have to prove myself during seven-on-seven. Going into that, it was a fun experience, but it was also nerve-wracking because you want to play to your limit, but you also can’t go too far to the point where everything breaks down. I like playing one step at a time, and then when team camp came around it was more mental stuff like getting the plays down and the formations. That was a bit of a struggle, but as things progressed into two-a-days, it got easier and, honestly, it all clicked at one point.”

“Going into that first game, I had the jitters — it was nerve-wracking going to play Mayo, who we knew was going to be really, really good. That first touchdown (in Week 1) honestly didn’t even feel real. It was nice to get that first career touchdown out of the way and get the emotions out, but we were down and had to keep fighting to get back into the game. And then I had a second touchdown a few quarters later, and that was pretty crazy. Reading the recap of the game a couple days later and seeing all those stats, I really didn’t think I had all those numbers. But, yeah, that was a fun game. After that, we had some road blocks ahead and Ginskey eventually stepped in (at quarterback) and we all had to adjust, but we stuck through it and I think we played well toward the end of the season. I really think our best game was our last game (in the Section 1-5A championship). We played so hard, and that’s why it’s so heart-breaking. You know, when two teams go at it, and both are playing at their best, it’s tough because they can’t both have the outcome they would want. We knew in the summer that we had a purpose — we had something to fight for.”

Q: Entering this season, it became clear right away that competition was going to increase and there was going to be a lot more depth at the pass-catching positions. How do you feel like that whole dynamic has worked out?

“Coming into this year, this was going to be one of our best receiving groups that we’ve had in a long time, and I knew that. There is a lot of explosiveness with guys like Gleason being added to the mix. You also have guys like Hullopeter and Beyer — who are both really good — and then I’m in the slot. I thought we could have been really dangerous and put up some huge numbers, but then Ginskey went down and Truelson had to step into a big spot and, I don’t know…that can make it hard to establish chemistry with all the guys. But injuries are a part of the game and it just shows how important it will be for us to remain healthy for the playoff run.”

Q: You guys flashed a lot of potential, but you’re right, injuries have hamstrung this team and probably effected the passing game more than any other group. As a full group, you haven’t really put a lot on tape for opposing teams to dissect. Do you feel like that can actually make this team even more dangerous because (opponents) will be gearing up to stop the run and that could really open things up for you guys down the field?

“Most definitely. I think Week 1 (against Mayo) showed what this team can do against great competition. Honestly, our record doesn’t mean anything. As they say, every team is 0-0, and that’s all that really matters. We have proven that we can come out strong and punch teams in the mouth. Against Northfield (in Week 5), it was 21-0 with less than two minutes left before halftime, but we had so many mistakes and that game could have easily been 31-nothing, 35-nothing. On Saturday, we will have to limit those mistakes and mentally be a lot better.”

Q: In the passing game, how big is it to have Ginskey back out there?

“If Ginskey can get time to throw, I definitely think the passing game will open up and it will be tricky for the defense to try and cover. When we go with a trips look, for instance, it’s dangerous. The defense can’t really isolate one player in that concept against zone coverage. But, yeah, there will always be one guy that’s open. It’s tough for a defense when you can attack with so many explosive guys, because you can’t cover them all.”

Q: Both as a team and individually, it was an up and down regular season. Do you feel like the slate has been wiped clean now that it’s playoff time? Does it feel like a fresh start?

“For sure. Especially in games like (Northfield). Everyone is going to have a big role in this game and it’s go big or go home. Anyone can show out. This could be a fresh start with the postseason. I think the entire team needs to shine, but it’s key for seniors like myself to set the tone and expectations. This week in practice I feel like everyone has been dialed in. There are some tense situations when we are running against the scouts, but that’s good — you need that.”

Q: Has it dawned on you that every game could be your last?

“Honestly, I think about it. But you just have to play every snap like it’s your last one. That injury I had (before Week 4), I kind of got scared because I wasn’t sure what kind of ankle sprain it was or how serious it could be. So, I’m just blessed that it wasn’t that bad and I’ve been able to come back fully-healthy. It felt good to get back out there against JM (in Week 6). But, yeah, from here on out, it’s literally go big or go home.”