AUSTIN — If there were any sour feelings still lingering on Owatonna’s sideline following last week’s one-sided loss to No. 1-ranked Mankato West, they quickly evaporated in a cloud of dust behind the churning legs of Conner Grems on Friday night.

And by quickly, that means exactly one offensive snap.

Accelerating through a gaping hole on the left side of the line, knifing through the second level of the defense and winning a foot-race to the end zone, Grems dashed 80 yards to paydirt on the first play of the game and set the tone for a thoroughly dominant first half of football for the Huskies at Art Hass Stadium. 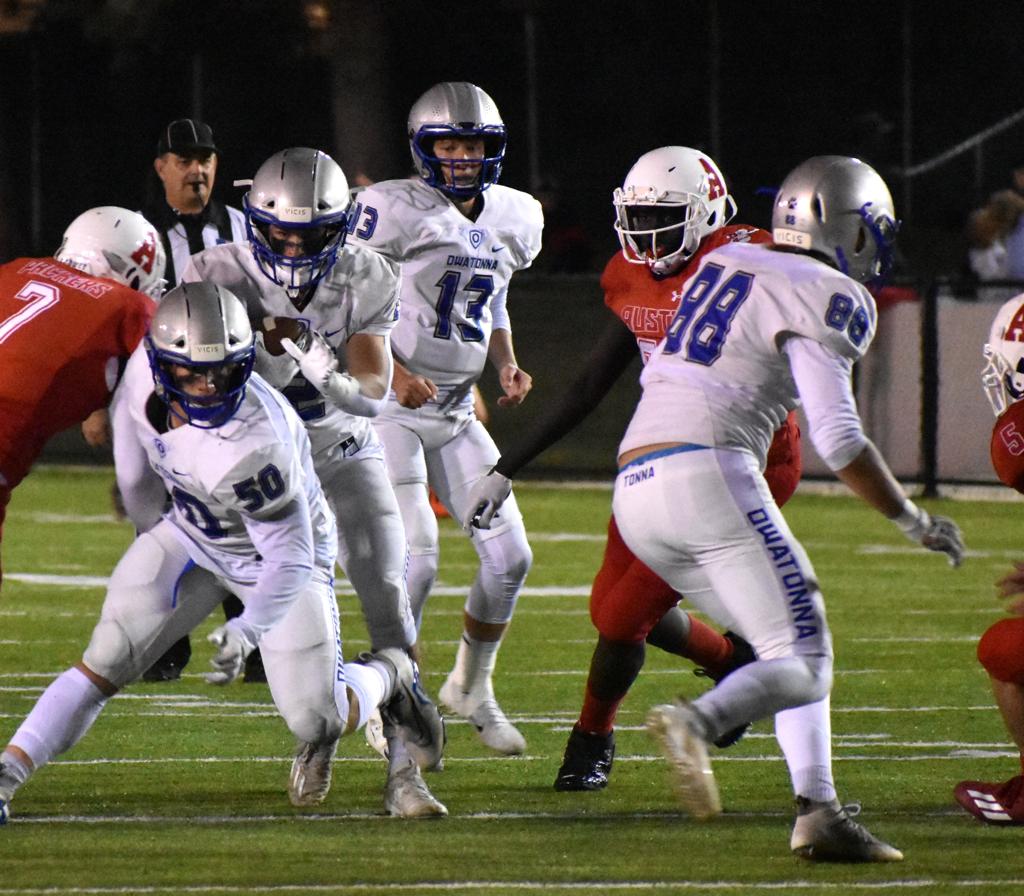 “It was good to set the tone up front,” Owatonna coach Jeff Williams said of Grems’ game-opening run. “He had the ability to get a bit of a head-start tonight. The holes were opening up and he was able to make his cuts at the second level. He was able to go after people and drive his shoulder a couple times for that extra yardage. The ability to get a head of steam helps him tremendously.”

Buoyed by Grems’ game-opening gallop, Owatonna’s starting offense racked up 203 rushing yards on 23 carries, the vast majority of which came in an explosive first half. The Huskies build a three-touchdown lead by punishing Austin on the ground in the opening 12 minutes and had the Packers buried by halftime after adding another 13 unanswered points in the second quarter.

Making his first start since injuring his ankle in Week 1, quarterback Jacob Ginskey spun a pretty 26-yard touchdown pass to Owen Beyer to make it 28-0 with 8 minutes, 11 seconds on the clock.

On the Huskies’ next two possessions, Drew Henson drilled back-to-back field goals to round out the scoring and give Owatonna a 34-0 lead at the break. Rebounding from just his second career miss against the Scarlets, Henson connected on a 45-yarder at the 4:16-mark and added a chip-shot from 24 yards as time expired.

“I thought we ran the football very effectively in the first half, and that’s what got us going,” Williams said. “I think we established our ability to run the ball off tackle and I was very pleased with that.” 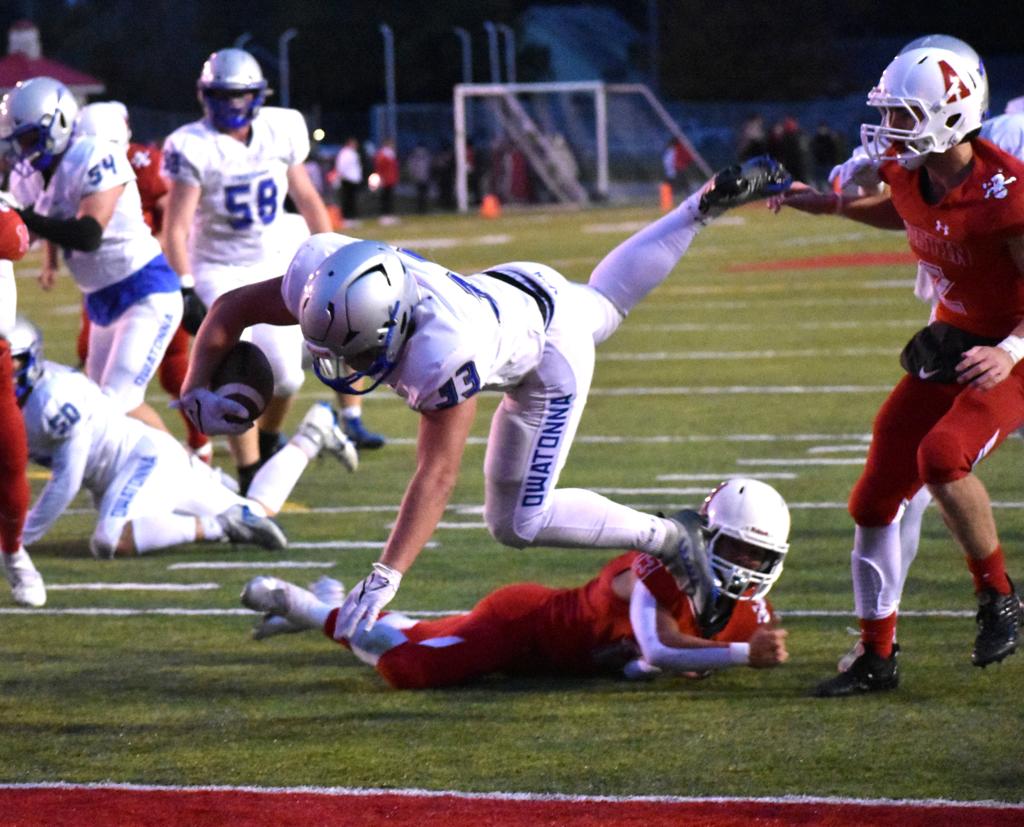 Big fullback Drew Kretlow needed just four carries to reach 40 rushing yards and tallied his lone touchdown in the first quarter to help make it 14-0 with 3:46 on the clock.

Following a Collin Vick interception — his first of the season — Owatonna took possession at the Austin 35 and needed just three plays to find the end zone, building a 20-0 advantage when Grems found daylight near the right sideline, flattened a Packers’ defender at the 5-yard line and crashed into the end zone to finish off a 21-yard scoring jaunt.

Defensively, the Huskies were equally dominant in the first half and yielded only one first down in Austin’s final four possessions, forcing two punts, picking off one pass and turning the Packers over on downs in the stretch.

Austin netted 44 of its 58 total yards in the first half on its opening possession and was tackled behind the line of scrimmage five times. Packers’ quarterback Jack Lang was harassed by Owatonna’s relentless blitzing linebackers and had little time to breathe in the pocket, let alone complete a forward pass. He connected on just 1 of his first 13 throws and finished the game with just four completions. 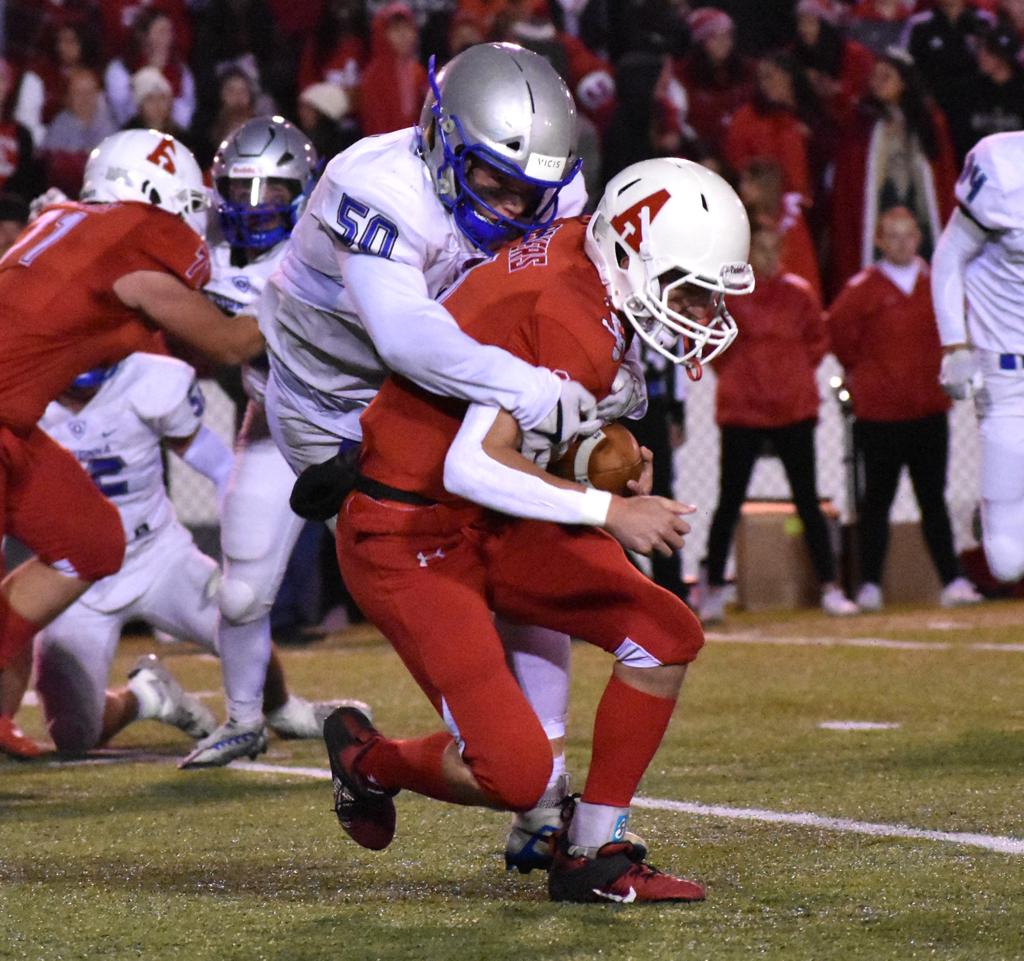 Owatonna junior Torrin Smith collected a pair of sacks and now leads the team with five on the season.

“I think we gave our (starting defense) a decent look during practice this week, but it’s tough to simulate with our scout team what Austin likes to do,” Williams said. “They hit that first pass and moved the ball a little on the opening drive and it was like ‘OK, that’s what they do, that’s what it looks like full speed.’ And then our kids are just good enough to just sort of take that away. I think they sat on those routes well and we were able to pressure the quarterback — a lot of hits (and) and lot of pressure. We were in the backfield quite a bit.”

As pretty as the first half was, the second half was equally as choppy. Things appeared to be aiming toward a similar trajectory as the first two quarters after the Huskies forced a 3-and-out on Austin’s opening possession of the third, but OHS experienced the first of several second half hiccups when Beyer muffed the ensuing punt.

One play later, Austin speedster, Manny Guy, gained a step on his defender and hauled in a 45-yard touchdown pass to account for the Packers’ one-and-only score at the 10:45-mark of the third.

The lead was never threatened thanks to a few timely third down conversions and sustained drives by the Huskies, but Owatonna turned the ball over three times and allowed three sacks in the second half to put bit of a damper on what was an otherwise thorough and inspiring victory for the Huskies (2-2 overall, 2-2 Red Division) on the road.

Still, Williams is acutely aware that his team will need to improve in a number of areas of they plan on beating a resurgent Northfield team next week on the Huskies’ home field. The Raiders blanked New Prague on Friday and will enter the Week 5 showdown with a 3-1 record.

“I am a little disappointed that we didn’t come out in the second half and play better,” he admitted. “We have work to do. We aren’t where we need to be as a football team, so we will go back to the drawing board and get back to practice on Monday and get some work done. We are not a finished product.”

Beyer — who would have finished with two touchdown receptions had his first grab of the game in the back of the end zone not been nullified by a penalty in the second quarter — led the Huskies with three catches for 54 yards and one score. Both of Justin Gleason’s receptions converted key 3rd-and-long plays — one in each half — and the senior added 38 receiving yards. Caleb Hullopeter surpassed 200 yards for the season after hauling in three passes for 30 yards.

Ginskey ended 12-for-24 for 145 yards to go with one touchdown and two interceptions.