TOO BIG, TOO STRONG - updated

Maybe it’s in the water, or maybe they actually do grow on trees, but the fact remains the same: Mankato West is stockpiling super-sized linemen to a degree that is simply unmatched at the Class 5A level.

Heck, toss in the state’s 32 largest football programs from Class 6A and you’d be hard-pressed to find more than a small handful of teams that could match the Scarlets’ stable of imposing athletes.

“We found out what it was like playing against real men up front tonight and found out what it takes to block them,” Jeff Williams said after the game. “They were big and physical and they owned the line of scrimmage. They pushed us around a little bit up front.”

Mankato West pushed, shoved, blocked, grinded and bulldozed their way to more than 400 yards of total offense and extended the program’s overall winning streak to 22 straight games with a 38-7 victory at the OHS stadium in Big Southeast District action.

The Scarlets (3-0) have been so dominant over the last two-plus seasons that the 24-point difference on Friday night was actually notably slimmer than the 37-point margin of victory they posted on average in 13 games last season.

Against the Huskies (1-2) — and similar to the vast majority of its games during the impressive streak — Mankato West made a prophetic statement early in the game, owned the line of scrimmage and attacked with its usual blend of straightforward tactics that have proven impermeable against any sort of effective counter since the winning streak began way back on Oct. 9, 2020.

Spurred by a game-opening play that saw running back, Jackson Froderman, disappear into a mass of bodies just beyond the line of scrimmage and proceed to ride the wave of humanity forward for nearly 10 yards, Mankato West finished with 313 rushing yards. The Scarlets piled up 175 yards on the ground in the second quarter alone, scored 24 unanswered points and built an insurmountable 31-0 advantage heading into the break.

The Scarlets’ per-carry production more than doubled from the first to the second quarter to 15.3 yards and culminated with a healthy 9.2-yard average for the game 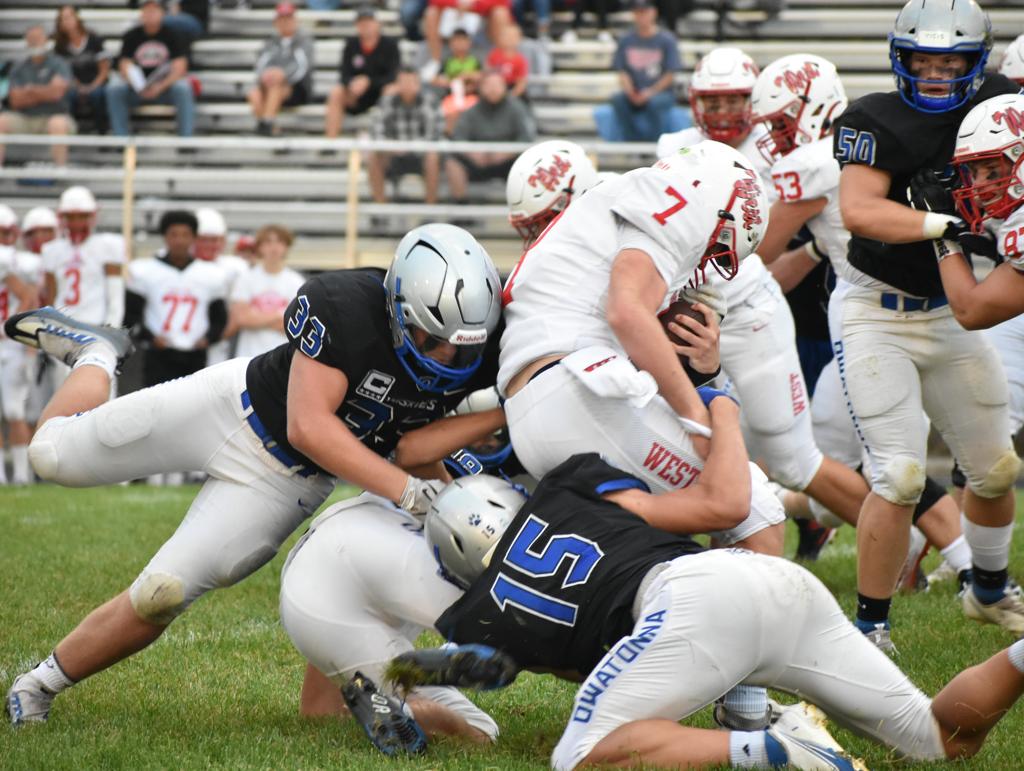 Froderman spearheaded the Scarlets’ three-headed backfield platoon with 207 yards on just 16 attempts for a healthy 12.9-yard average. He scored a team-high three touchdowns and accounted for 85 of Mankato West’s 98 yards on the game’s opening possession that set a definitive tone for the rest of the evening, ultimately providing a humbling experience for an Owatonna team that entered the game expecting a far different outcome.

“I think everybody on our side of the field wanted to play better,” Williams said. “I think we are disappointed with how we showed up. I think we felt like we would give them a better fight. This wasn’t a game where we came in here looking at the coming weeks and hoping to just survive. But, will we improve by playing against a team like this? Yes.”

Far from the only opposing performance overshadowed by Mankato West’s blunt stark physicality and execution, Owatonna’s pass-catching duo of Caleb Hullopeter and Justin Gleason shined light on their potential as a dangerous 1-2 threat for the second time in three outings to open the season.

Hullopeter — who now has 192 yards and eight receptions in three games — added to his team-high receiving production with 87 yards on three grabs. The majority of his yardage came on a single play on Owatonna’s opening possession when he hauled-in a pass from Noah Truelson and turned it into a 69-yard catch-and-run near the right sideline. A penalty put the ball inside the 10-yard line, but the drive ended with a missed field goal and the Huskies didn’t penetrate the red zone again until the fourth quarter.

Gleason finished with three catches for 68 yards and is second on the team with 135 yards in three games.

Another major highlight for the Huskies came when Ethan Armstrong caught two passes on Owatonna’s only scoring drive, the second of which came on a perfectly-spun throw from Noah Wellnitz in the back of the end zone from 14 yards out with 5:01 left in the fourth. It was Armstrong’s first career touchdown of any kind and Wellnitz’s first career offensive touchdown.

Wellnitz finished 2-for-2 for 32 yards with Armstrong on the receiving end of both throws.

“We got some kids some time on the field,” Williams said. “They work hard. Armstrong, to catch two balls there on that last drive, he works his tail off in scout and it was just really positive to see him out there and be in position to do some good things.”

The Scarlets’ lead was never threatened, but Owatonna’s defense improved in the second half, forcing four punts and surrendered just the one touchdown when Froderman escaped around the edge and darted into the end zone untouched from 14 yards out at the 5:01-mark of the third.

Owatonna junior, Torrin Smith, collected his team-leading third sack on the season when he crashed into the backfield and brought Bart Mcaninch down on the final play of the third quarter.

After playing two of its first three games against undefeated and state-ranked opponents, Owatonna enters a stretch where the schedule gets significantly more forgiving, at least on paper. The Huskies are also inching closer to the return of No. 1 quarterback Jacob Ginskey. In his lone performance this season, the junior amassed more than 300 passing yards and three combined touchdowns (two passing, one rushing) before leaving the game with a sprained ankle in the middle of the fourth quarter against Rochester Mayo in Week 1.

Williams said the plan is to evaluate Ginskey’s progress on Monday and “see where he’s at.” Owatonna plays Austin (1-2), Northfield (2-1) and Rochester John Marshall (0-3) in its next three outings and it is expected he will return at some point during that stretch.

“We have a lot of work to do,” Williams said. “At this point in the season, we were here a year ago, and it’s about getting better at the things we do well — the things that will help us win some football games. Can we string enough offense to put enough (productive) drives together? I guess that remains to be seen.”

Leading 7-0 after the first quarter, Mankato West scored the first of three successive touchdowns in a 7-minute span in the second quarter when Elijah Bollman sprinted into the end zone from nine out yards at the 10:38-mark. Roughly three minutes later, Froderman accelerated through a giant crease up the middle for a 35-yard TD to make it 21-0.

And then, the back-breaker.

After forcing the Scarlets into a 4th-and-9 on their next offensive possession and desperately needing a stop to endure their already-fading hopes of staying in the game, Mcaninch dropped back and slung a pass deep across the middle in the direction of a streaking target Ethan Johnston. Matching Johnston step-for-step, Owatonna defensive back, Owen Beyer, extended his right arm and swatted the ball into the air, only to watch it spin backwards and fall directly into Johnston’s waiting hands. Snatching the ball without missing a step, the Scarlets’ receiver escaped into the open field and didn’t stop until crossing the goal line 35 yards later. The score gave West a 27-0 lead and was painfully symbolic of how things unfolded on Friday night.

“It didn’t cost us the ballgame, but it was just one of those things that happened on a night like tonight,” Williams admitted. “We will get better.” 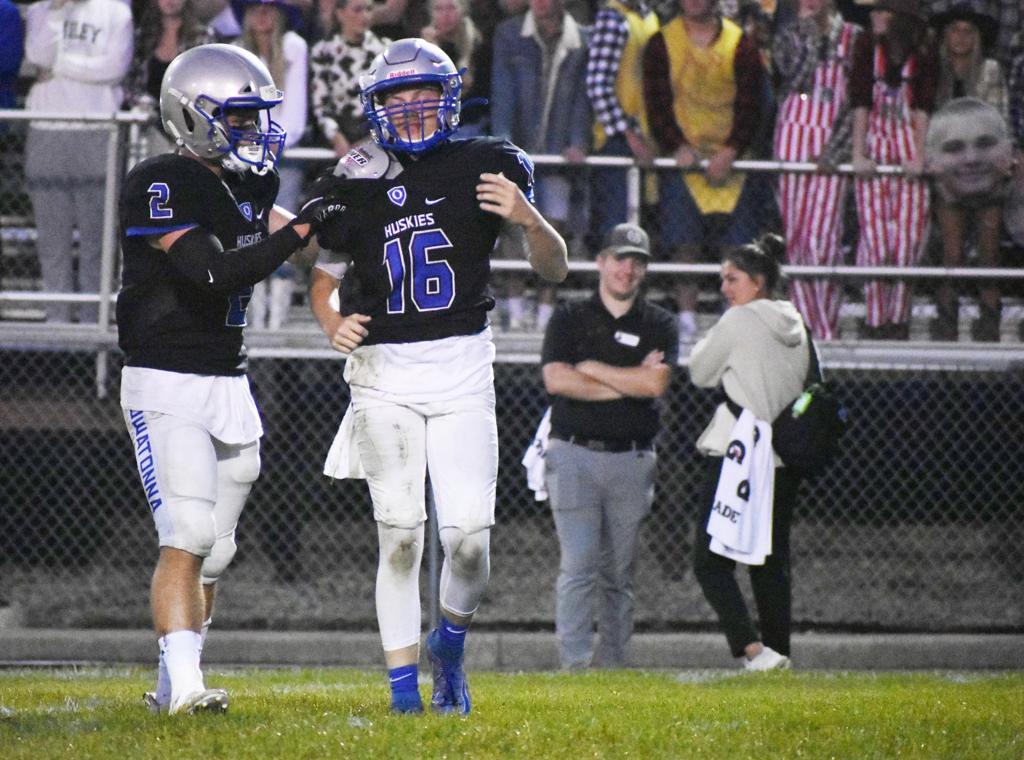 Defensively, Mankato West was equally threatening in the trenches as it was on the offensive line, utilizing a deep rotation of big bodies to suffocate the Huskies’ ground game. The Scarlets permitted just 34 rushing yards on 13 carries, Owatonna’s longest running play coming in the third quarter when Truelson escaped the pocket and dashed ahead for eight yards. Other than that Owatonna’s starters didn’t gain more than four yards on any single carry.

UP NEXT: Owatonna travels to Austin carrying a 1-2 record for the second consecutive season. The Packers have posted eerily similar results to the Huskies so far this season, losing in Week 1, winning in a shutout in Week 2 and coming up short in Week 3. On Friday, Austin lost, 28-17, to New Prague.