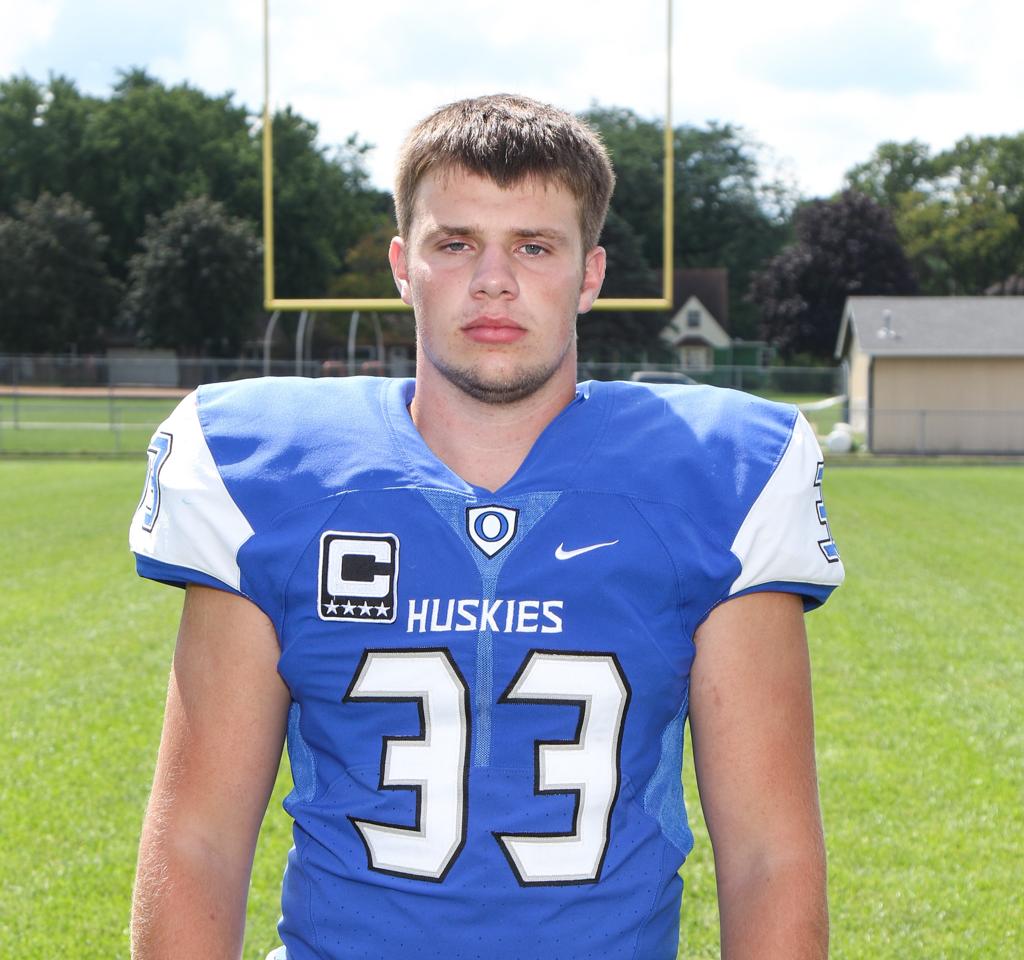 “Well, it’s actually a funny story. Sophomore year I was 44, and when they asked what number I wanted last year, I wanted to keep the same number, but I just forgot what it was. So, I just want with 33. I knew it was two of the same digits, and couldn’t remember. After I realized it wasn’t 44, it was too late, but that’s OK.”

“I really like blue on blue. That’s what we always wear for homecoming. That’s always a special game. I like how you can see how dirty it gets.”

“My dad wrestled (at OHS) and I think he only played football until junior high. He was just too small — I think he weighed no more than 125 pounds throughout high school.

Q: Memorable phase frequently used by one of your football coaches:

INTERVIEW: Getting to Know DREW KRETLOW

Q: You and Collin (Vick) are the only two guys coming back that made the all-district team as full-time defensive players last year and both of you are captains. Naturally, your teammates are going to gravitate toward you guys, especially the younger players. How have the last couple years prepared you for this elevated responsibility?

“Really, as a sophomore I was brought on (on varsity) for special teams and got some playing time at the end of games and gained experience that way. And then last year, I really got thrust into the limelight with Grant (Achterkirch) being hurt right away and (Conner) Grems getting injured in the first game. I had so much to learn and, honestly, I played pretty terrible in Week 1. It was pretty bad. But I was happy with my growth throughout the season. I mean, that all-district nod just really cemented my growth. I was really proud of that. It really helped when Grant got back (in Week 3). It was great playing alongside him and having that guy next to you that you can count on no matter what. I know he is going to set me right. And then coming into this year, being a captain, I’m going to need to coach some of the guys on the defense — we have some inexperience there. I hope I can bring them along and help them understand what it’s like on Friday nights, because it’s a whole different ballgame.

Q: That’s interesting, because now the roles have been reversed and you’re in Grant’s position and are looking for someone reliable to step up and play alongside you. What type of player do you think will fit best in that role?

“First of all, you have to have a friend next to you. You have to be able to build a special bond with them because you have to know wherever I go, they need to set me right. I need them to keep me honest and keep me going. And that goes back to being a captain. It means you have to be the one to start building that connection, and you build it with the whole defense. It’s a team effort and you have to count on every single person. As a leader of this team, I have to build those connections and help tie everything together.”

Q: Owatonna has produced some of the best players at the position in the state over the last 15-20 years. I don’t know if you’ve given any thought to it, but what is it like being part of that lineage?

“Oh yeah, there is so much pride knowing that it’s a group of guys that are consistently finishing up there with some of the top tacklers in the state and producing some of the top tackle-rates. It’s a lot of pressure to carry on that torch, but it’s a lot of pride. It motivates you.  I am going to be on that field hitting as hard as I can and bringing it every single play. I am going to play that way, not just for me, but for all the guys that came before me.”

Q: You play a pivotal position in the middle of your team’s aggressive, man-to-man defensive scheme where success often boils down to winning a series of one-on-one battles at every level of the field. In your mind, what makes the whole thing work? What are the keys at each position group?

“It starts on the d-line and those guys have to soak up blocks. That frees up me and the rest of the linebackers and we can take free routes to the football. And then when you lock down the run game, they have to throw it. That’s when we count on our whole DB squad to lock down everything through the air. After that, it just works.”