BRING ON THE RAIN - final update

If fact, it only grew stronger and stronger.

With its starting quarterback, Jacob Ginskey, sidelined for the foreseeable future with an ankle injury, the Huskies were planning on shifting, albeit temporarily, to a far more run-centric offensive attack moving forward, so as the weather swiftly deteriorated during pregame warmups prior to its Big Southeast District showdown against Rochester Century, it was Owatonna that didn’t flinch when the game finally kicked off amidst a chilly downpour.

The Panthers, well, they went about things a little differently and ultimately never stood a chance in a 24-0 Red Division rout on Friday night in Rochester.

Intent on attacking through the air early on and having its already-faint running game completely snuffed out by the Huskies before intermission, Century helplessly spun themselves into Owatonna’s sticky defensive web and limped off the field at the end of the night with nothing more than fresh bruises and drenched uniforms for its efforts.

For the Huskies, they headed back home having secured their first win of the season and 13th in a row against the Panthers dating back to 2010, the discriminating final score emblematic of a team that had a strong week of practice and executed a sound game plan when the lights came on.

“The kids were really positive and upbeat,” said Owatonna coach Jeff Williams. “It was a good week of practice. They did the prep that was necessary. Defensively, listening to those kids calling out plays in advance — it was clear they studied their game plan. They knew where their responsibilities where and what Century was going to try and do against us in any given situation and then they executed.” 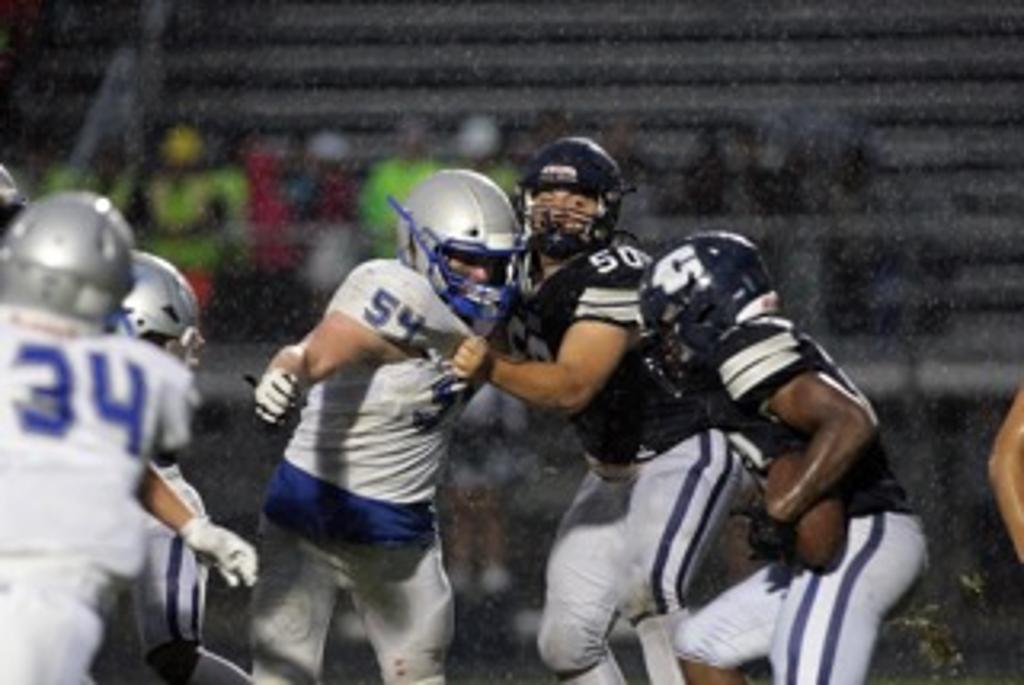 Having already proven to be a stingy, athletic and salty bunch through the first calendar month of the season, the Huskies’ defense punished the Panthers from start to finish. They permitted just 46 yards of total offense, rang up five sacks, forced two turnovers and held Century to just 6-for-24 (26%) through the air.

Century didn’t move the chains until the 4:50-mark of the second quarter and gained just 16 rushing yards on 24 attempts. Had it not been for Harrison Esau’s a 35-yard scamper in the third quarter, the Panthers would have netted negative-19 yards on the ground. 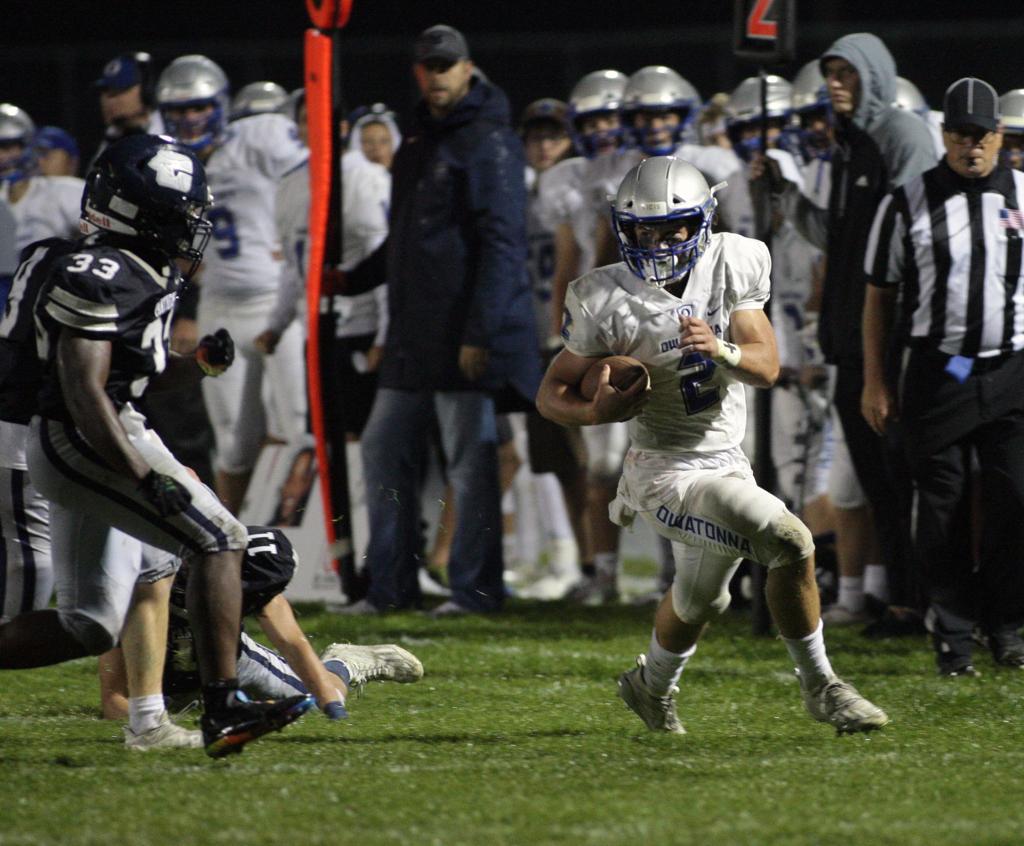 Owatonna’s was able to eventually pull away on the scoreboard by grinding out 181 rushing yards on 43 carries before the backups took over in the middle of the fourth quarter. Conner Grems led the way with a career-high 101 yards and scored the Huskies’ only necessary TD when he capped a short drive with a 1-yard jaunt with 34 seconds left in the opening quarter. Hulking fullback Drew Kretlow provided a punishing compliment and added 66 yards on the ground while hauling in a key 11-yard reception in the second half.

“Drew takes a lot of pressure off me,” Grems said after the game. “It’s good to have a two-headed monster.

Carrying the ball with a physical audacity reminiscent of their linebacking roots, Grems and Kretlow churned out positive yardage at an ultra-productive rate, essentially transforming their 39 combined touches (counting receptions) into a succession of exhausting body-blows landed at the heart of Century’s beleaguered defense.

With the Panthers having stifled his production in the third quarter, Grems remained resolute and busted a game-high 29-yard run in the fourth quarter while racking up 46 yards — or roughly 45% of his total production — on his final four carries of the game.

“For me, I started really trusting the line,” Grems said. “I stopped dancing and started hitting the holes. It all came together tonight.” 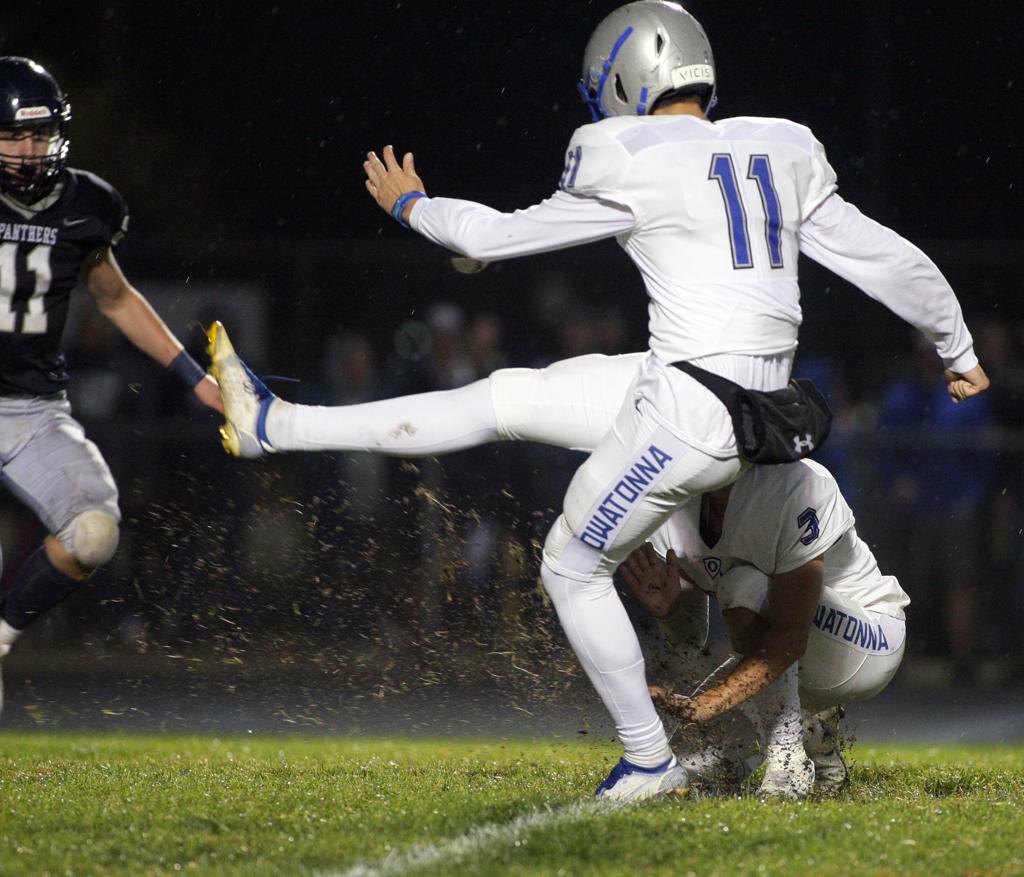 Owatonna’s domination of the Panthers extended to special teams and field position as well. Kicker Drew Henson continued to outdo himself and provided further validation to the notion that he is perhaps the singular greatest weapon at his position in the entire state. Not only did he effortlessly drill a 33-yard field goal during the most intense downpour of the evening to give OHS a 10-0 lead at the 7:47-mark of the second quarter, but perfectly struck a trio of punts that pinned Century inside the 12-yard line. He also boomed two touchbacks and was 3-for-3 on extra points.

“He is such a weapon,” Williams said of Henson. “It was such a field position game tonight. Obviously, our defense played great and got us great field position and then we where able to convert. With the field conditions what they were, with the field position what it was, being forced to go at least 80 yards every time had to be demoralizing.”

After Henson gave Owatonna a multi-possession lead with his first field goal of the season, Noah Truelson extended the lead to 16-0 with a 1-yard TD run at the 7:48-mark of the third quarter. With the starters having earned an early exit and some well-deserved rest, Mitch Seykora cemented the final score with a 2-yard scoring plunge with 5:04 on the clock in the fourth.

Owen Beyer collected his third interception in two games to start the season while highlighting a defensive secondary that blanketed Century’s talented core of young receivers. Esau was held to just two completions in his first 12 attempts of the game and twice went at least five consecutive throws without completing a pass.

The Panthers were required to punt nine times and began seven offensive possessions inside their own 20-yard line. Owatonna, conversely, started seven possessions on Century’s side of the field and initiated two touchdown-scoring drives directly inside the red zone.

UP NEXT: vs. Mankato West (2-0), Friday. A week after an abbreviated shutout of Rochester John Marshall in a game that was called at halftime, Mankato West played all four quarters against New Prague and put its considerable arsenal of weapons on full display in a 49-14 drubbing of New Prague. Mankato West scored on its first two offensive plays of the game and had the Trojans reeling by the end of the second quarter. The defending state champion Scarlets have now won 21 straight games.