Rochester Mayo escapes Owatonna with 34-27 victory in another physical, back-and-forth showdown with the Huskies.

This one hurts. Literally.

Not only did the Owatonna football team suffer a gut-punching 34-27 season-opening loss to Rochester Mayo in Big Southeast District action, but will be without its rising star quarterback for the foreseeable future.

Late in the fourth quarter, Jacob Ginskey was dragged to the grass for the Spartans’ fifth sack of the evening and immediately grasped at his right ankle as he rolled onto his back.

With several players on both teams having already fallen victim to painful cramps playing in the oppressive early-September heat, the training staff was on high alert and quickly spilled onto the field, making their way to the fallen OHS quarterback as the pile of bodies cleared from the area and made their way back to their respective sides of the field.

After a few moments, Ginskey limped off the playing surface with assistance of Owatonna head athletic trainer, TC Carlyle, and was sent directly to the bench behind his teammates for examination. Ginskey spent the remainder of the contest leaning backwards atop a padded medical cart, his foot tightly wrapped in ice and his face betraying the obvious pain he was suffering in a highly-concentrated area directly surrounding his lower leg.

Ginskey eventually left the stadium in crutches and was evaluated over the weekend where it was discovered that he did not suffer any broken bones. However, it is unlikely he will play for at least two weeks and might not return until the second half of the season. The degree to which he sprained his ankle makes it difficult to establish a formal recovery timetable.

Ginskey wasn’t the only Owatonna player who left the field less than 100% as several of his teammates either entered the game nursing a few nagging wounds, or played through a variety of minor ailments.

“We’ve got kids dinged up,” Owatonna coach Jeff Williams said on Friday night prior to learning of Ginskey’s official diagnosis. “We are going to have to dust ourselves off and get back at it next week and see who we have at practice on Monday.”

The snap immediately following Ginskey’s injury — a third-and-long situation at the OHS 24-yard line — ultimately transformed into the game-deciding play as Rochester Mayo’s all-district defensive lineman, Ethan Kramer, impeccably detected Owatonna’s screen pass, stepped in front of Noah Truelson’s throw and rumbled untouched into the end zone with 4 minutes, 5 seconds on the fourth quarter clock to give his team a 33-27 lead.

The defensive touchdown capped a sudden 14-0 scoring burst by the explosive Spartans that also included a Carter Holcomb 40-yard touchdown reception at the 5:39-mark. On the play, the junior broke wide open down the right sideline after his defender, Owen Beyer, collapsed almost immediately after the ball was snaped as a debilitating cramp left him unable to even backpedal a single step.

“Beyer was out for 10 plays and then said ‘I can go’ and went back out there,” Williams said of the situation leading up to Holcomb’s game-tying touchdown reception. “He cramped up right away and fell down. Certain things just didn’t go our way tonight.”

Before leaving, Ginskey was having a career performance and displayed a level of rare fortitude in the face of Mayo’s constant backfield pressure. The Spartans graduated unquestionably their top three offensive skill position players from last season’s section championship team, but rolled back a bevy of gnarly linemen that wreaked havoc on the Huskies’ inexperienced offensive line.

“They were very athletic (up front) and moved Rudy Lozoya from an edge (rusher) to the nose (guard) and he was causing some difficulties inside,” Williams said. “He’s a good football player. We were able to find some traction throwing it, but Jacob (Ginskey) was under duress virtually all night…He was getting hit, he was getting flushed.” 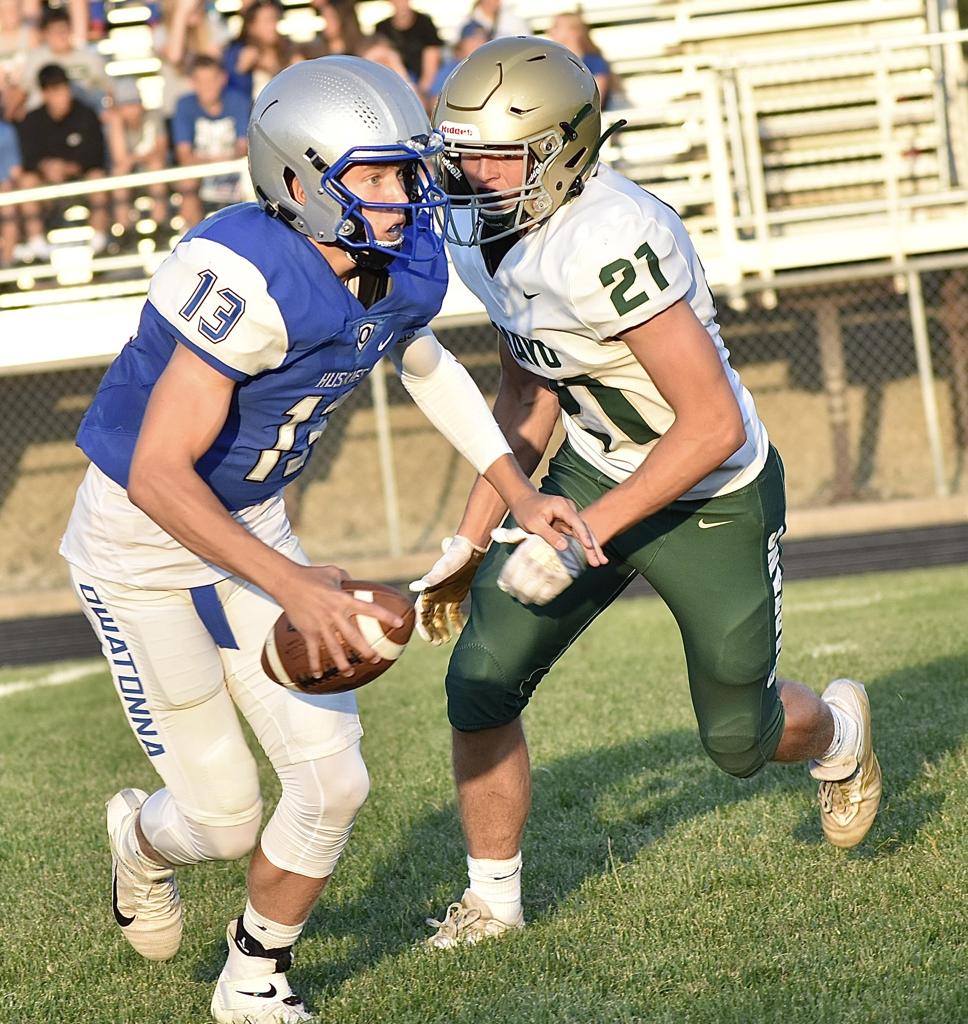 Despite the relentless compression within the pocket and occasional off-kilter snap, Ginskey rang up 303 passing yards and accounted for three touchdowns, finding Justin Gleason in the first quarter for a 67-yard connection on a pass that was intended for Caleb Hullopeter, only to have the ball bounce off his shoulder and directly into Gleason’s arms. From there, Owatonna’s senior track star out-raced several pursuing defenders into the end zone for his first career varsity touchdown.

Later, Ginskey connected with his sophomore brother, Nolan Ginskey, for an 82-yard catch-and-run that electrified the crowd and helped level the score 20-20 with 10:31 left in the third.

Two possessions later, Jacob Ginskey gave Owatonna its first — and only — lead of the game when he capped a short drive with a 2-yard touchdown plunge with 1:15 on the clock in the third.

Hullopeter didn’t score, but showed dynamic play-making ability to go along with an exceptionally soft pair of hands. The junior finished with six receptions for 105 yards — all-but five coming in the first half.

“We like Hullupeter,” Williams said. “I think he is better in the middle of the field than he on the outside. So, we have to find ways to continue to dial up things where he’s running across the middle. He’s a bigger, physical receiver and he can make people miss. He’s a guy that we had our eyeballs on all summer and is a kid that stepped up tonight and played a very nice game.” 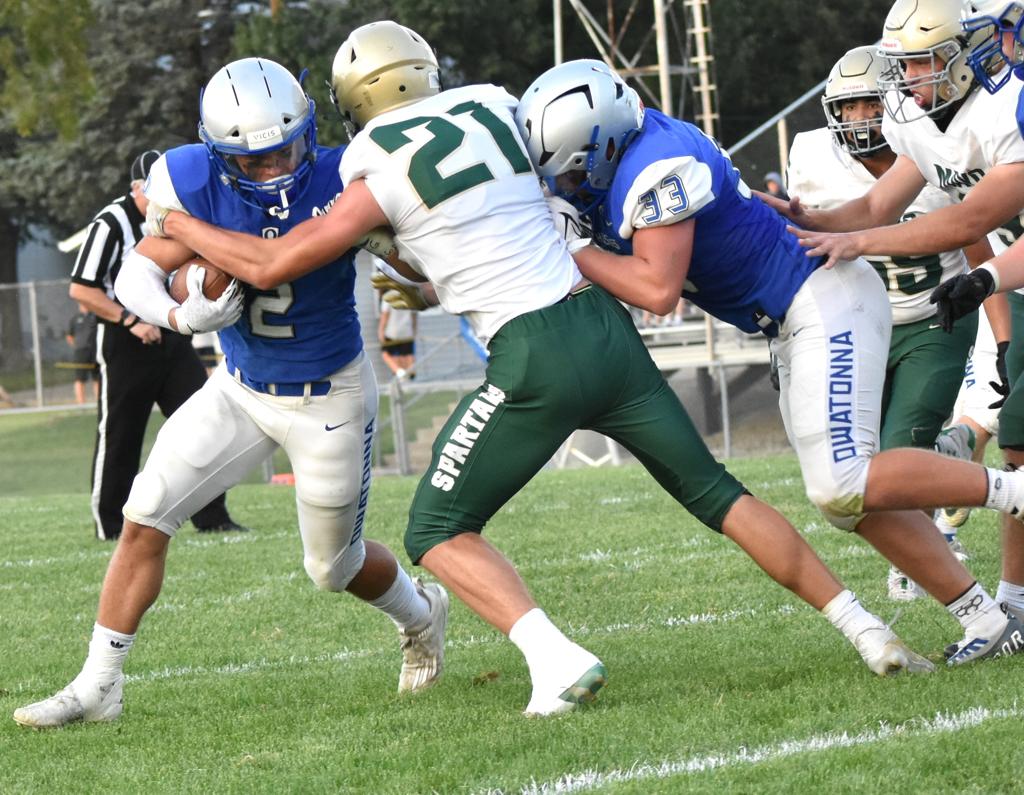 It was tough-sledding for Owatonna’s starting tailback Conner Grems all game, but the senior scored a touchdown when he pin-balled through the Mayo defense from four yards out late in the second quarter to help tie the score, 13-13. Not counting sacks, Owatonna unofficially netted 74 rushing yards. Only twice did the Huskies surpass 10 yards on a single carry.

Mayo got on the board first after the intermission, breaking the tie when Lozoya escaped for a 57-yard touchdown run exactly 90 seconds into the stanza.

The Huskies scored the game’s next 14 points and appeared to be in great position to salt away the victory when Gleason tracked down a deep Rees Grimsrud pass and intercepted the ball near midfield. After a quick celebration, the Owatonna sideline was shocked to find a yellow flag resting on the grass and equally-stunned when they were told the play would be nullified because of defensive pass interference.  Not only did Mayo gain a first down due to the 15-yard infraction, but was gifted another 15 yards after the referee flagged the Huskies for unsportsmanlike conduct.

Five plays later, Holcomb was striding wide open down the right sideline and hauling in a pass without a defender within 50 yards. The reigning all-district performer and first-team preseason all-state nominee finished with eight receptions for 138 yards to go with a pair of touchdowns.

“We had a little trouble with him at first,” Williams admitted. “And then we had some answers dialed up, but Beyer just lost his feet— he cramped up and (Holcomb) was gone.”

Despite technically allowing his man to escape for a game-altering touchdown, Beyer displayed impeccable coverage skills throughout the entire evening and picked off a pair of passes while essentially shutting down half the field while covering a few different Mayo receivers.

Gleason led the team with eight solo tackles, two of which came behind the line of scrimmage while junior Mitch Seykora collected his first career sack. 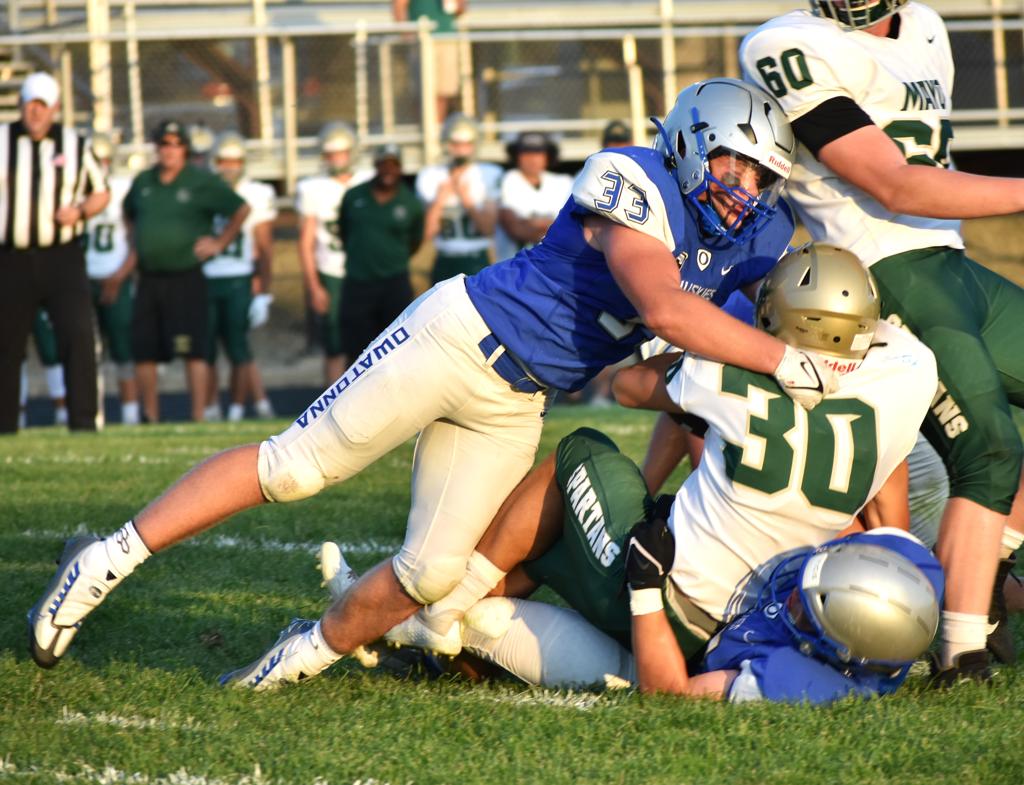 Per usual, the Owatonna defense was courageous against the run, permitting just 99 yards on 23 carries. Remove the Spartans’ 57-yard TD, and the Huskies allowed just 1.9 yards-per-carry.

UP NEXT: at Rochester Century (0-1 overall, 0-1 Big Southeast). Despite leading for the majority of the game, the Panthers lost their season-opener on Friday night to New Prague, 23-20.