CHRONICLING A CHAMPION AND PREPARING FOR THE FIRST OF MANY LASTS

The 2022 season is shaping up to be a special campaign on a few different fronts.

First and foremost, it will mark the final year the Owatonna football team will host games at the aptly-named OHS stadium.

And that’s a really big deal.

The natural grass field — running parallel vertically to Harriet Avenue and wedged into the eastern portion of the high school grounds — has been the Huskies’ stronghold for more than 100 years, and on Friday, Sept. 2, they will play their final season-opening football game at the hallowed grounds when Rochester Mayo comes to visit for a 7 p.m. kickoff.

Laying the foundation under former head coach Jerry Peterson and reaching new heights under Jeff Williams, Owatonna has turned the field into a house of horrors for opposing teams. With the elongated home bleachers resting mere feet from the outer brick façade of the main building in the center of campus, the stadium has sustained a distinct and intimate atmosphere over the decades. On game nights, thousands of Husky loyalists rub shoulders and cram into the bleachers while hundreds more line the chain link fence surrounding the edge of the track that rings the playing surface. 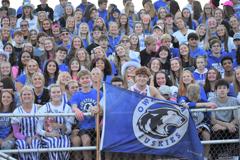 Scan the crowd on any given Friday night in the fall and you’ll find generations of diehard fans flocking to the stadium, 80-year-old couples layered in blue-and-white-clad gear huddled below the press box sharing a unique experience alongside teenagers decked out in a variety of distinctly-themed outfits packing the student’s section on the north corner of the stands.

On game days, the palpable buzz of anticipation progressively simmers in the final 90 minutes prior to kickoff, the soundtrack of the bustling festivities provided by the OHS band under the direction of Pete Guenther. Before long, coaches and players begin trickling onto the field from behind the bleachers and drift into the steady rhythm of their customary pregame routines.

The methodical tempo of individual drills slowly builds as the countdown drops below 60 minutes and the fans begin to flow into the stadium. Before long, the entire Owatonna team is on the field and the pregame routine finds its pinnacle at around the 45-minute mark. The pulse of the stadium sharply reaches a new level when the thundering tone of dozens of OHS football players begin belting out the traditional “Husky Jumping Jacks”, spelling the school’s name in a deep, unified tenor that reverberates throughout a two-block radius. 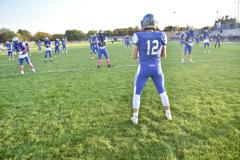 And I know this from experience.

Beginning with my first year on the beat as a part-time sports journalist for the People’s Press in 2013, this fall will mark my 10th season closely covering the team in some capacity. I’m still two decades behind future Hall-of-Fame broadcaster, Roy Koenig, but I can make up some ground after he retires. That is, “if” he retires.

But I digress…has it really been that long?

Ironically, the first Owatonna football game I ever covered was at the OHS Stadium…against Rochester Mayo…in Week 1.

I can remember details from the evening like it was just yesterday. It was one of those perfect late-summer Minnesota nights and I made sure to get to the stadium extra early to soak-in as much of the pregame atmosphere as I possibly could before kickoff. My sports editor at the time, the generous Kaleb Roedel, volunteered to take photos of the action for me, so all I needed to do was show up with a pencil, a cell phone, a clipboard and get to work.

Nine years later, and I’m still showing up extra early. I’m still armed with little more than a cell phone, a clipboard and a pencil. And I still get right to work.

Since that fateful day nine-and-a-half years ago, I have attended a total of 46 Owatonna football games at the OHS stadium, missing only one contest in 2015 when I got married and two more in 2020 after I left the newspaper in the middle of the condensed season. In those outings, the Huskies are 42-4.

Yep, you read that correctly: Owatonna has rung up a staggering 0.913 winning percentage at the OHS stadium in games that I have attended over the previous nine seasons. And in case you are curious, the team is 44-5 overall in home games in the same span.

I knew there weren’t many football teams that left Owatonna with a victory in my tenure, but to be honest, it took actually digging into the numbers for me to truly appreciate just how special this entire ride has been.

And it’s not done yet.

Assisting the program in the same capacity as I did last year, I will once again attend every game (home and away) this fall and provide the same journalistic content for the team’s official website, OwatonnaFootball.com. As always, game recaps will be available for free online within a couple hours of the final whistle on Friday nights and the remainder of the week will feature a steady stream of regular content, including player profiles, game notes, previews and other unique articles. Again, all without a paywall of any kind. I’ll also do my best to publish new episodes of the Owatonna Football Podcast over the next couple months and keep the designated Facebook page updated with photos.

And as if I needed something else to keep me busy this fall, I will be partnering with OwatonnaLive and its new simulcast radio partner, KOWZ FM, in an official capacity and joining the crew in the booth for special pregame and halftime coverage each week.

As I finish reminiscing on nine years covering the team and continue to eagerly anticipate the final season at the OHS stadium, it’s pretty cool to know that my passion for the Huskies is collective. I’m just one of a countless number of individuals who steadfastly support the team and can’t express how excited I am for season No. 10 to finally get going.