By JON WEISBROD I OwatonnaFootball.com

ROCHESTER — In a back-and-forth skirmish that embodied the term “instant classic” and distilled every distinguishing element that makes high school football so special into a wild 48-minute package, it truly was unfair that one of the teams had to lose on Saturday night and turn in their uniforms on Monday morning.

With the exhilarating pendulum of momentum trading hands after seemingly every other snap — and the overall narrative of the contest transforming on numerous occasions throughout the evening — it was top-seeded Mayo that stole the victory from second-seeded Owatonna on its home turf, 38-33, in the Section 1-5A championship game at Spartan Stadium tucked into the southeast corner of Rochester.

The thrilling win keeps alive what has been one of the finest seasons in Spartans’ history and reserves their spot in the state tournament for the first time since 1997 while handing OHS its first loss in seven section title games since 2011.

Sixth-ranked Mayo will play Mahtomedi (8-2) in the state quarterfinals on Saturday at noon in Woodbury and will not have to face the top four-ranked remaining teams — No. 1 Mankato West, No. 2 St. Thomas Academy, No. 3 Andover and No. 5 Rogers — until a potential Prep Bowl appearance. The other matchup on Mayo’s side of the bracket features unranked Alexandria (6-5) and No. 10 Robbinsdale Cooper (8-2).

Saturday’s decision also inked the final chapter in what was a truly memorable campaign for a Huskies team that started 1-2, picked up steam in the middle of the regular season, fell flat in Week 7, rebounded with a gritty win in Week 8 and nearly pulled off a stunning victory on the road a single step from the state tournament.

“There was adversity,” Owatonna coach Jeff Williams said roughly 20 minutes after the game, a discernable mist still lingering in his eyes following the emotional loss. “The first three weeks were rocky. We were one and two with a two-point win over Century and we were wondering if there was a way that we were going to pull the whole thing together, and then we did… They came together and played well down the stretch and beat a good Kasson team (in Week 8); beat a good Northfield team (in the section semifinals) and had this team on the ropes. I think we found the perfect scheme for what could beat Mayo. We just fell a little short with it tonight.”

Considering the stakes, Owatonna executed one if its finest offensive game plans in quite some time, drawing up a bevy of running plays that continuously left Rochester Mayo’s athletic defense on its heels. Spearheaded by a downright breathtaking performance by senior Dylan Maas, Owatonna rang up 317 rushing yards on 42 carries. Maas — who found the end zone on runs of 69, 60 and 19 yards — accounted for 318 total yards and scored four touchdowns, three rushing and one receiving. 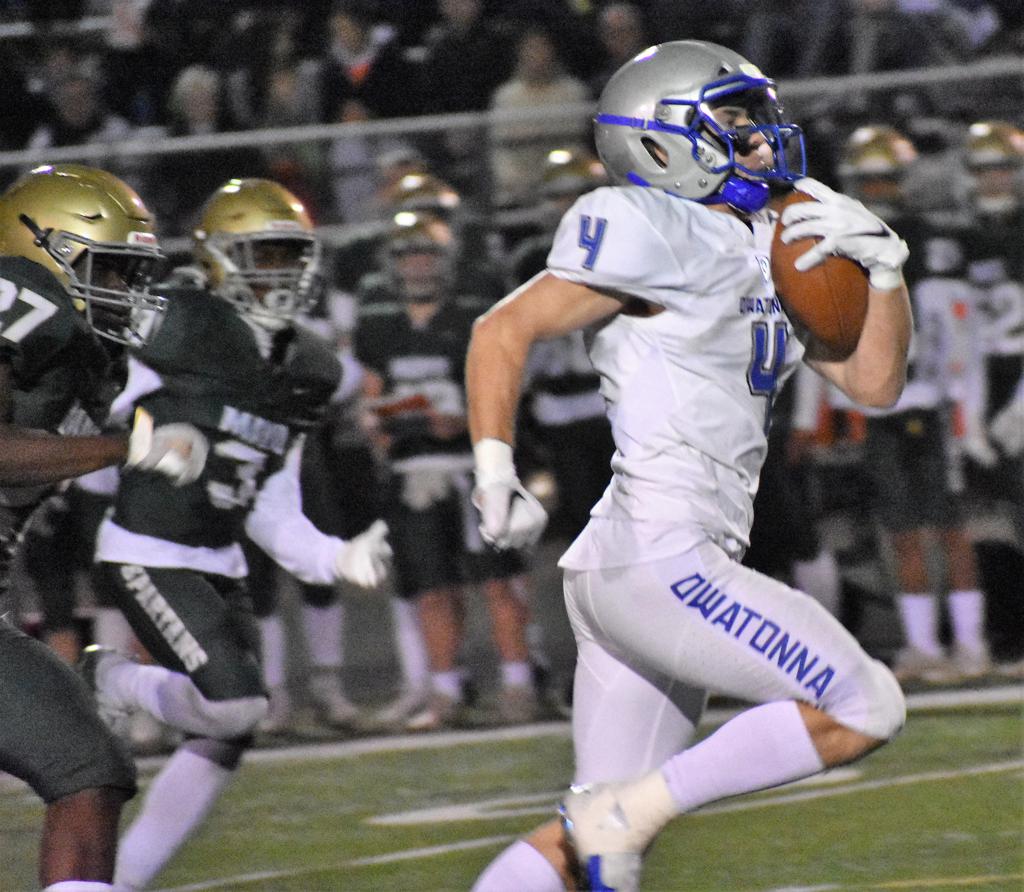 “Dylan had a great game,” Williams said. “We were able to get some things blocked up front and made some creases for them and he can be explosive. We saw that as a junior; he would get a little room and would just be gone. And to be able to manifest that on a big stage against a great defense we weren’t able to run against last time we saw them (in Week 1), that’s remarkable. To be able to establish the run game and have Dylan do what he did tonight was very rewarding and it shows the progress that our team had made this season.”

Indeed, the Huskies’ physical and often-explosive routine on the ground was the principal reason why they found themselves with a 23-7 advantage late in the second quarter and a 33-32 lead with 9 minutes, 15 seconds on the clock in the fourth following Drew Henson’s second field goal of the game.

But as they had done all contest, the Spartans countered on the ensuing possession and looked to their incomparable senior receiver to ignite what would prove to be the game-winning drive. Facing 80 long yards to the end zone after Henson smashed his third touchback of the contest, the Spartans dialed up a deep pattern down the seam in the middle of the field on first down.

With his stout offensive line providing a comfortable pocket to scan the defense, Bennett Ellsworth stepped up and launched a pass in Holcomb’s direction near midfield. As the ball spun high through the air and began its descent, it appeared as though the pass was destined to fly over the head of the intended target and perhaps into the arms of OHS cornerback, Owen Beyer, who was trailing on the play. But just when it looked like the Huskies’ sophomore was going to make break on the ball, Holcomb laid out, stretched his left arm forward, snared the pigskin with one mitt and cradled it into his chest as he banged into the hard carpet below.

“He’s a good football player,” Williams said of Holcomb “They threw one down the middle against Beyer and I thought for sure it was overthrown or Beyer was going to pick it because he was over the top. Holcomb just made an unbelievable catch and it’s just tough to account for stuff like that. He’s just that good.”

With the crowd reignited after the highlight-reel grab, the Spartans fed off the energy and regained the lead five plays later when Noah Smith wiggled through a crease at the line of scrimmage and busted loose for a 32-yard touchdown at the 7:15-mark. Even after the two-point conversion pass fell incomplete, Mayo still had a five-point lead as it kicked off to the Huskies following Smith’s second touchdown of the evening and sixth total TD against Owatonna in two matchups this season.

The Huskies took over in great position at the MHS 43-yard line and immediately gained traction with back-to-back 6-yard runs by Maas and a diving 9-yard catch by Ayden Walter. Four plays later, OHS found itself in prime position after a pass interference penalty against the Spartans on third down brought the Huskies just inside the Mayo 16-yard line with roughly 2:30 remaining.

However, things quickly unraveled from there. A botched snap, a sack and an incomplete pass set up a 4th-and-26, and all Ginskey could do after being flushed from the pocket was toss a prayer toward the end zone that was ultimately intercepted by Cayden Holcomb with just under 60 seconds on the clock. 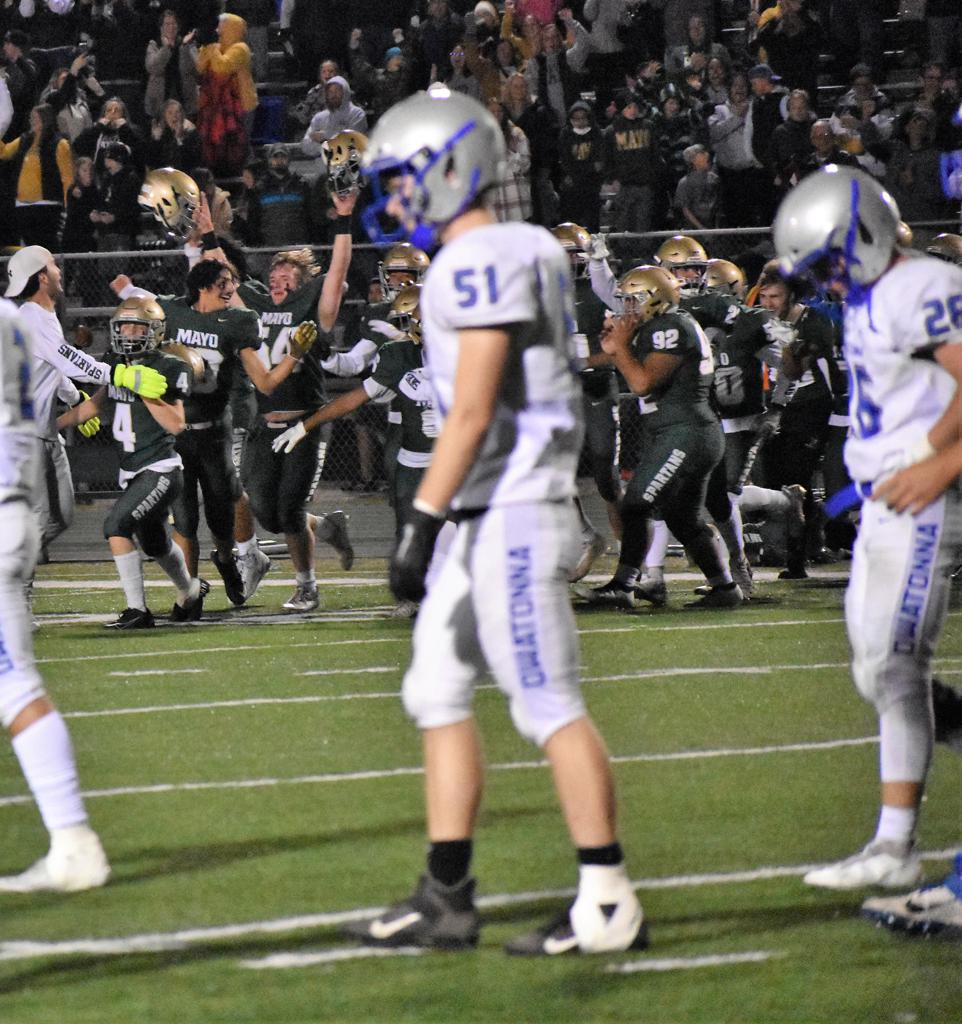 And that was it. Owatonna had just one timeout in its pocket, meaning all the Spartans needed to do was take a few snaps, drop to one knee and commence a well-earned celebration in front of their home crowd.

Aside from the interception that clinched the game, Owatonna was the victim of two additional turnovers, both of which led directly to Mayo touchdowns. The second turnover — a fumble on the second play of the third quarter — loomed especially large as it gave the Spartans the lead for the first time since the opening quarter when Jamal Beale scooped the loose ball near the right sideline and bolted into the end zone for a touchdown from roughly 35 yards out.

“It was such a game of big plays and momentum changes and shifts, and just when you thought ‘OK, here they come, we are out of this thing, we went back up two times,” Williams said. “I thought we survived their onslaught, and then they would have another one. And, you know, we made enough mistakes to allow them to come back and get into it and you can’t do that against a good team.”

The Spartans gained their early lead on their second possession of the game when sophomore Carter Holcomb took a short pass and darted into the end zone from 18 yards out at the 7:41-mark. Rochester Mayo — which took the ball to start the game and promptly went 3-and-out — needed to drive less than half the field to get on the board after taking over following a fumble by the Huskies at their 42-yard line.

The Spartans’ efficient scoring march that gave them a 7-0 edge served as the opening salvo in a back-and-forth shootout that saw the Big Southeast rivals trade momentum — and the lead — several times over the next three-and-a-half quarters.

Owatonna wasted little time answering the bell after Mayo’s opening score and quickly tied the game when Maas zipped through a large hole on the left side of the line, slipped a tackle at the second level and out-ran the entire Mayo defense by half the length of the field with 7:23 to go.

The Huskies forced another 3-and-out and Maas busted another long touchdown less than three minutes later, flying into the end zone to give Owatonna a 13-7 lead with just under five minutes left in the opening stanza.

Before the end of the first quarter, OHS would pounce on Mayo’s only fumble of the contest and added to its lead early in the second when Henson drilled a 37-yard field goal at the 10:31-mark.

On the Huskies’ next offensive possession that started with 8:40 on the clock after another Mayo punt, Maas escaped for a 46-yard scamper on the fourth play of the drive to set up his 5-yard receiving touchdown with 5:21 on the clock.

The score extended Owatonna’s lead to a game-high 16 points, but the Spartans went to work and did what they have done to just about every opponent this season, piling up points in a hurry and drawing within 23-20 at the break. Smith scored the first of Mayo’s back-to-back touchdowns in the final two minutes of the second quarter on a 53-yard catch-and-run and Cayden Holcomb reeled-in a gut-punching 53-yard bomb with just 42 seconds on the clock. 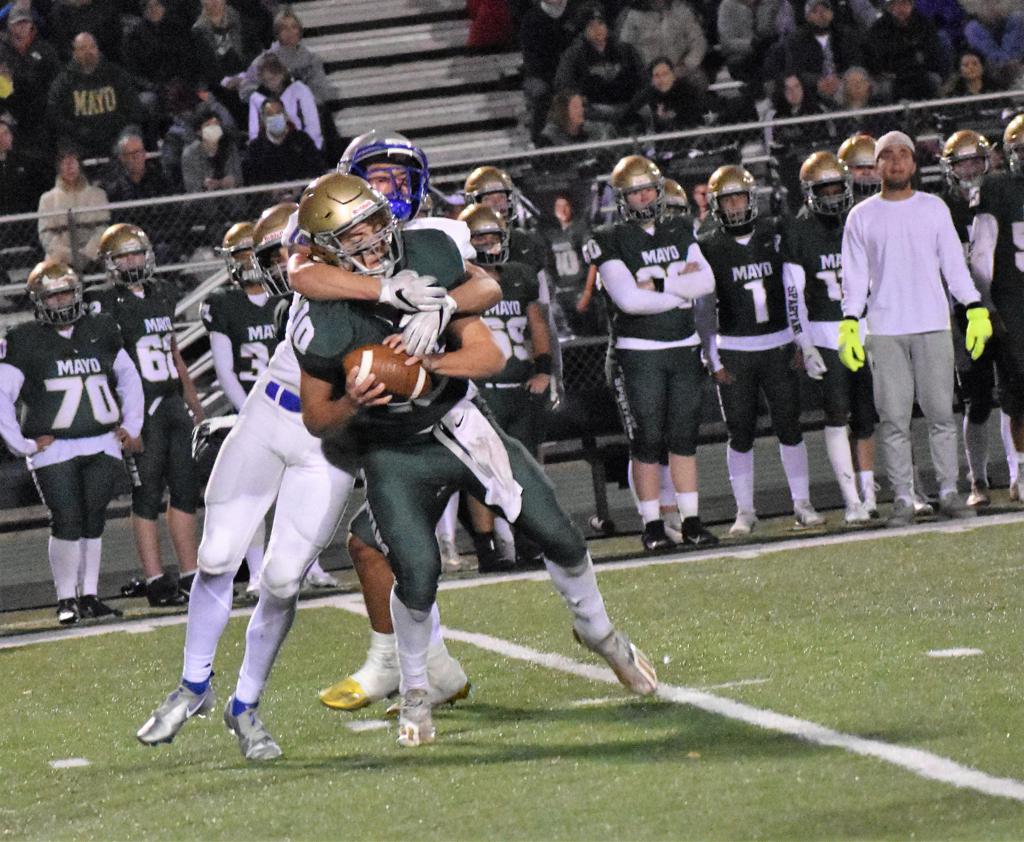 temporary 26-23 lead as Owatonna jumped back on top when Maas capped a 6-play, 60-yard drive with his fourth and final score of the game at the 7:56-mark.

The Spartans retook the lead at 32-30 less than four minutes later on a Smith 6-yard run, but OHS punched back and went ahead for the final time with 9:15 remaining in the game on a booming 38-yard field goal by Henson that would have been good from 50 yards.

Punctuating what was a tight battle, Mayo finished with 339 yards to Owatonna’s 331 and teams combined for 29 first downs, splitting the difference almost right down the middle at 14-15, respectively.

The Spartans were penalized eight times for 75 yards, but it was a somewhat phantom holding call against Owatonna with several Mayo players seemingly illegally positioned down field on an incomplete screen pass that gave life to on otherwise dead possession on 3rd-and-long in the second quarter. Had the flag not been thrown, Mayo would have undoubtably punted at its own 34-yard line and given the Huskies the ball with a 16-point advantage and more than five minutes to work with to pad its lead before halftime. Instead, Smith stretched forward for three yards on 3rd-and-2 and busted loose for a 53-yard catch-and-run one play later to trigger the 12-point scoring barrage to end the half.

What happened? Owatonna simply came up short in a memorable battle that won’t soon be forgotten against a great team. Despite the loss, the outstanding effort exemplified the maturation of a team that simply wouldn’t quit throughout the up-and-down 2021 campaign.

Owatonna’s 585 rushing yards in the previous two games is more than the team had through half of the regular season...The Holcomb brothers finished with 12 combined receptions for 175 yards...After scoring 31 points in Week 1 and adding 33 on Saturday night, the Huskies have officially accounted for the two highest-scoring efforts against Mayo’s defense this season.