OWATONNA — On paper, there is little that distinguishes Owatonna’s opponent on Saturday, Austin, from the Rochester Century team it played two weeks ago in its home-opener.

Against the Panthers, the Huskies limped off the field having lost far too many battles in the trenches and feeling extremely fortunate to have escaped with an often-ugly 16-14 victory.

Though it accounted for one of Owatonna’s two touchdowns on an interception return by Luke Wottreng in the second quarter, the defense also bent to an uncomfortable level and allowed Century to stick around until the bitter end thanks in large part to a series of missed tackles that led directly to a pair of long touchdown runs.

Just two weeks removed from their less-than-rousing effort against the Panthers and beginning the game with their third starting quarterback in as many weeks, the Huskies somehow spun yarn into gold and looked nothing short of spectacular for long stretches of what ultimately transformed into a Big Southeast District rout at the OHS stadium.

“We did feel it was going to be that type of game,” Owatonna coach Jeff Williams remarked on the similarities between Century and Austin. “We felt like (the Packers) were of the same level as Century, and we did make a couple mistakes early. We had to face some adversity, but I thought we settled in well. I thought our line settled in well. Our protection was really quite good and I thought we did a nice job in the run-blocking as well.”

Sophomore Jacob Ginskey — who began the season as the team’s emergency No. 4 quarterback behind a trio of seniors — shook off some early struggles and put forth a career-opening performance that won’t soon be forgotten. Playing behind a seemingly rejuvenated offensive line, Ginskey finished 13-for-18 (72%) for 193 yards and tossed four touchdown passes in what essentially amounted to three quarters of duty. Once he escaped the pocket and flicked a short TD pass to Nick Williams for the duo’s third scoring connection of the day, Ginskey and the rest of the OHS starters took a seat for the game’s final 11 minutes, 20 seconds after the Huskies had mounted a 43-7 lead. 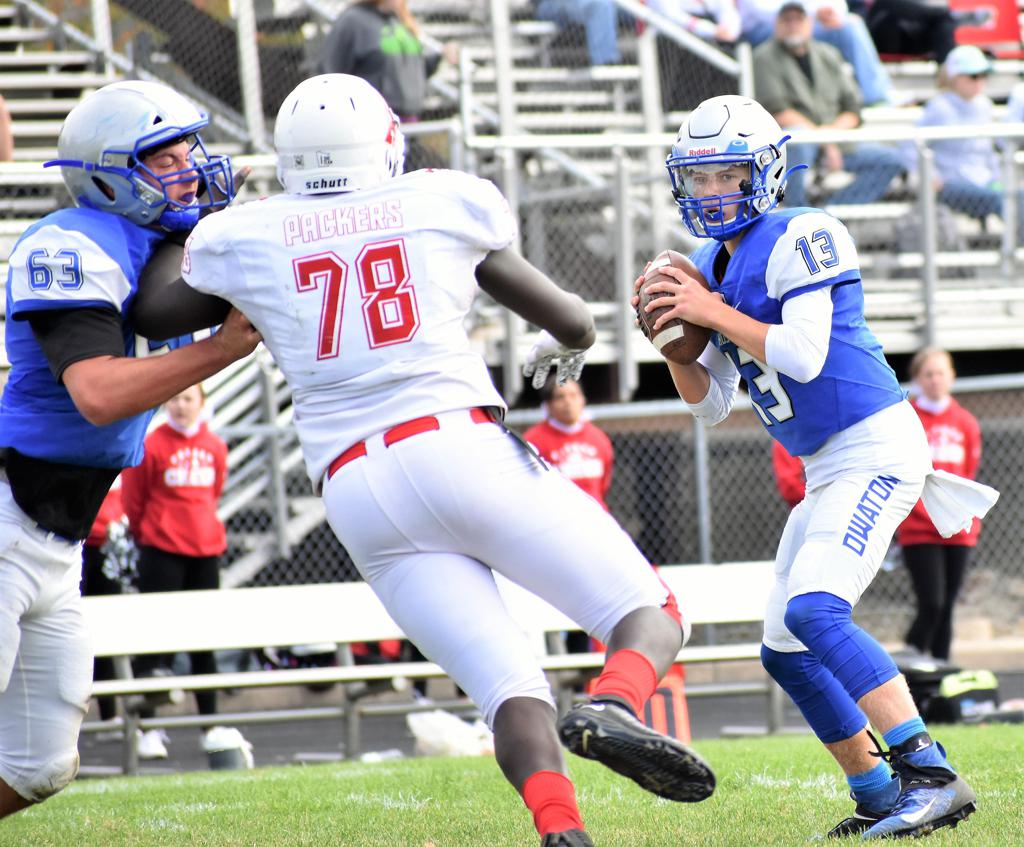 Williams was on the receiving end of Ginskey’s first six completions and put together his second ultra-productive performance in four weeks, amassing 147 yards on seven receptions. He scored the game’s first touchdown on a 15-yard slant pattern that turned into a 60-yard jaunt into the end zone after the senior snatched Ginskey’s pass in-stride and slipped through Austin’s secondary in the middle of the field. He added a 36-yard touchdown in the second quarter on a play where he made a nifty move near the sideline and skipped through a pair of defenders before accelerating into the end zone. His final TD came on the second play of the fourth quarter from 4 yards out.

Coming into the game, 205 of Williams’ team-high 231 receiving yards came in Week 1 against Rochester Mayo. With his effort on Saturday, he now has 378 yards and three touchdowns in four games. 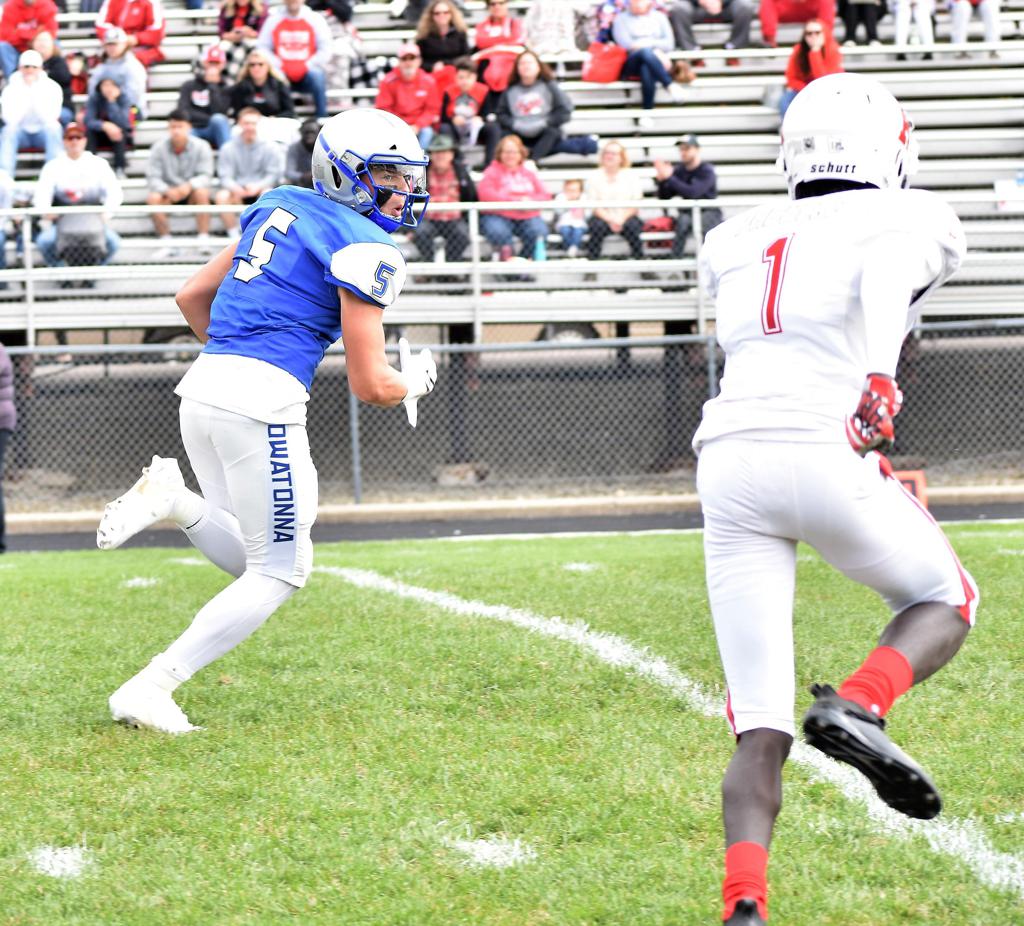 “I thought (finding Nick) was something Jacob was able to settle in with and find a little comfort,” Jeff Williams said. “He got the ball out to Nick and he made some plays. As the second half proceeded, (Ginskey) was able to spread the ball around a little and settled down in there. But I think, Nick made some nice plays in the first half to allow Jacob to settle in.”

Tailback Dylan Maas also made things easier on his rookie quarterback and put together the best single-game effort of his career. Coming into the contest averaging 2.1 yards-per-carry through the first three weeks, the senior exploded for 134 yards on just 18 carries, 103 of which came in the third quarter alone. Maas also had his fingerprints all over a pair of highlight-reel moments that pumped life into the already raucous student’s section on the home side the stadium.

Maas’ first dazzling play occurred in the middle of Owatonna’s 16-point third quarter and accounted for the first of his two touchdowns. After running straight ahead and getting lost in a sea of bodies near the line of scrimmage, Maas emerged from the scrum and caught the Austin defense flat-footed as he knifed through an opening at the second level and raced past three white and red jerseys into the end zone from 65 yards out, crossing the line having built a 10-yard cushion ahead of the nearest trailing defender.

Later in the third, Maas found himself flanking Ginskey just outside the pocket as his quarterback was about to be dragged to the grass for a sack. But just when it looked like Ginskey was going to go down, he spotted Maas to his left and flicked a short pass in his direction, watching from the ground as his teammate snatched the ball a mere foot from the turf, slip past two oncoming defenders and find the edge for an improbable 10-yard gain.

“I thought we did a nice job in the run-blocking and we were able to start allowing Dylan Maas to hit holes and to cut back,” Williams said. “It was important for him to get his sea legs because we had not established any sort of run game up until this point, so that was important.”

Not to be outdone by its suddenly high-flying offense, Owatonna’s defense made life miserable for the Packers in the second half. In fact, Austin found it nearly impossible net even a single positive yard throughout the game’s final 24 minutes and did not gain a first down in the span. Of the 19 plays Austin ran after halftime, eight went for negative yardage and another three went for 1 or zero yards. In total, the Packers finished with negative-34 yards in the third and four quarters combined, allowed two sacks on third down and lost a fumble.

“Austin was getting some traction in the first half,” Williams said of a Packers team that finished with 117 yards heading into halftime. “They were able to move the ball a little, but our kids really clamped down in the second half and we tackled better. We did a better job at the point of attack and wrapping guys up and not (their running backs) to squirt through that first hole to where big plays can happen like we have seen previously.”

Drew Kretlow added to his team-leading total with his fourth sack of the season and recovered a crucial fumble in the first quarter with Austin driving deep into OHS territory. A week after returning from injury and ringing up 12 tackles against Mankato West in Week 3, senior captain Grant Achterkirch was all over the ball once again and paced the team with another 12 stops against the Packers. His 24 tackles in two games already leads the team.

Defensive lineman Ryley Glassmaker made his return to the lineup after going down with a concussion in the fourth quarter against Mayo in Week 1 and racked up two sacks and six tackles. With Ginskey taking over the first-team offense, Cael Dowling — who started at quarterback in Week 3 — was able to focus his efforts at outside linebacker and forced two fumbles to go along with four tackles. 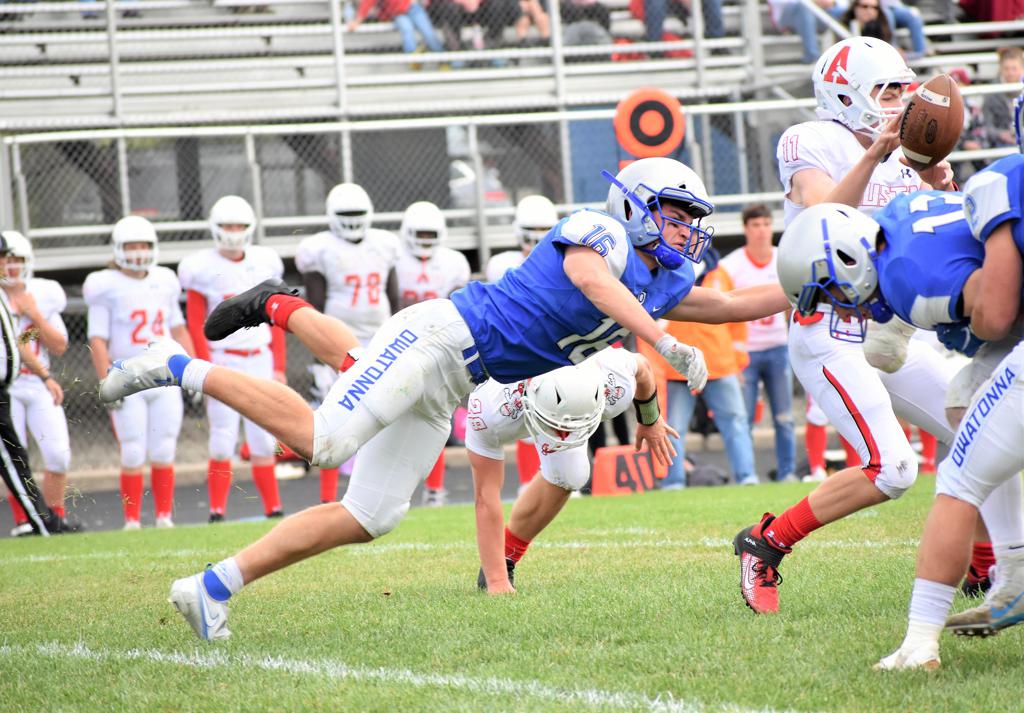 One of the more consistent position groups for the Huskies through the first three games, the defensive secondary, continued to make life difficult on opposing receivers and quarterbacks, allowing just two completions on 10 attempts for 20 yards.

As well as things ended for the Huskies, they started just as rough. In fact, things looked downright gloomy after Ginskey was intercepted on the first possession of the game and Austin proceeded to penetrate deep into OHS territory on the ensuing drive, marching all the way down to the 2 yard line after five productive plays. However, the Packers’ sixth snap ended up rolling on the grass after popping out of Joseph Walker’s grip and eventually into the grasp of Kretlow with 6:31 on the clock.

Though Owatonna didn’t cash-in until two possessions later, the recovery gave the Huskies new life and allowed them to eventually take the lead on Williams’ first TD grab at the 1:59-mark of the first.

Austin took advantage of the Huskies’ second turnover on a fumble and needed only 22 yards to find paydirt on a short run with 7:41 left in the second quarter.

Owatonna quickly regained the lead on a Ginskey-to-Williams connection and added to the cushion when Caleb Hullopeter snatched his first career touchdown reception from his knees in the back of the end zone with just 56 second left before halftime.

The Huskies’ first points of the second half came on a safety when Austin snapped the ball over the head of its punter and out of the back of the end zone. The play triggered a pivotal 16-point scoring barrage that saw Owatonna extend its lead from 21-7 in the middle of the third quarter to 37-7 with 2:07 on the clock. Maas scored his second touchdown of the game, and third of the season, on a 5-yard run to punctuate the spurt.

THE SLANT I How the Huskies played

In every phase and on both sides of the ball, this was unquestionably Owatonna’s best effort of the season, and it’s not even close. Playing behind a sturdy offensive line that gave him time to comfortably survey the defense, Jacob Ginskey was fantastic in his first career start at quarterback and the Huskies’ defense smothered the Packers in the second half. If they sustain this type of effort in the second half of the season, there’s reason to believe they could easily earn a top two seed in the section and transform into the team no one wants to play come postseason time.

Owatonna junior Ayden Walter caught three passes for 29 yards…Mitch Seykora capped the scoring for the day and recorded his first career touchdown on a 5-yard run with roughly 5:40 left in a game that transitioned to the “running clock” mercy rule early in the third…Huskies’ kicker, Drew Henson, boomed seven touchbacks and didn’t miss an extra point.

The Raiders: Coach Williams expect the Raiders to be “at least a notch above” the Packers in a matchup against a sub-district and Section 1-5A opponent. Northfield is 2-2 overall, beating Austin, 21-20, in Week 1 and taking down John Marshall, 31-7, in Week 3. The Raiders losses have come against No. 6-ranked Rochester Mayo (49-22) and most recently, New Prague (31-6).

Story and photos by Jon Weisbrod

Search “OwatonnaFootball.com photos” on Facebook for a photo album from this game and each of the previous three weeks